We had our first day on the road in the blue Kumuka truck, currently christened "Nelly" but Cliff and Claudia where keen for suggestions. We didn't have enough time to see the pre-Inca ruins of Tiahuanaco. The border crossing took a while but went smoothly. We arrived in Puno that evening, and were not very impressed. The hotel didn't seem to be finished (the top floor looked like a building site, and in the courtyard they were demolishing a shower block).

We had a group dinner in "the best restaurant in Puno", the service was very slow and they didn't even serve cuy (guinea pig). We found a better restaurant the next night in Puno.

We had an early start for our two day boat trip on Lake Titicaca. Leaving from Puno harbour, our first stop was on of the los Uros floating reed islands. Here we had the chance to buy more knick knacks, and take a reed boat for the twenty metres to the neighbouring island. This was a natural island, formed when the lake water level rose, tearing the living mat of reeds off the bottom of the lake.

On the way to Amantani Island, Jenny, Adel and Andy: 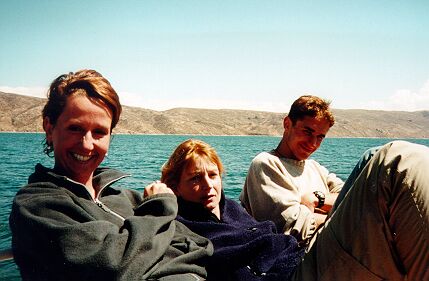 We then had three hours on the boat to Amantani Island where we sent the night, groups of two or three tourists each staying with a local family. We played flying kites with their children. In the evening we all walked up to the top of the hill where we had a look at some more ruins, and watched the sunset. It was too cloudy to be very spectacular. 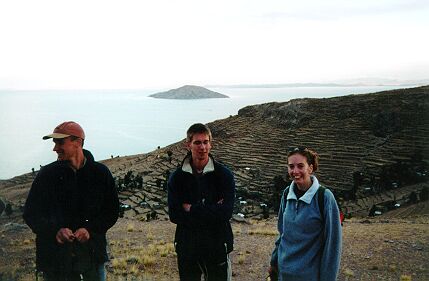 After a dinner of fried fish, chips and rice we where all taken to a local bar to have some drinks and dance. 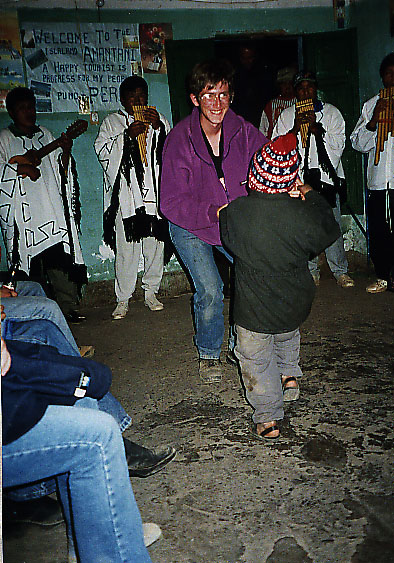 Our first stop was Taquile Island. We walked up to the main village where we played football in the square. Some local school children where supposed to be playing us but this fell through. We had a passable lunch and then walked down to the harbour. We then had another three hours on the boat to reach Puno.

We had dinner in La Casona which was much better. Gareth and Patrick had battered cuy, which they said tasted a bit like chicken but there wasn't really enough meat on it to tell. There was also a pretty good live performance by a pan-pipe group playing while we ate. They seem to go round all he restaurants each evening, collecting money and selling tapes and CDs - some of the group did buy some.