The whole Paracas Peninsula and the Ballestas Islands are all part of a National Reserve, created in 1975. It is one of the most important marine reserves in the world, and boasts a high concentration of marine birds - the islands are a major producer of guano. In the harbour there were flocks of pelicans: 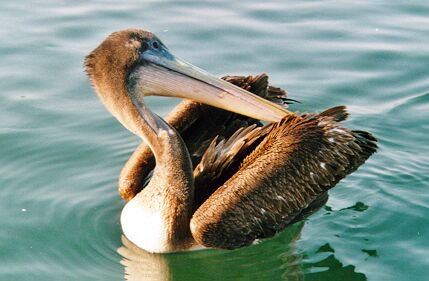 On the way out to the islands we saw another figure drawn in the sand dunes by the sea, known as the Candelabra or cactus figure (the cactus are believed to have been used by shamans for hallucinogenic effects): 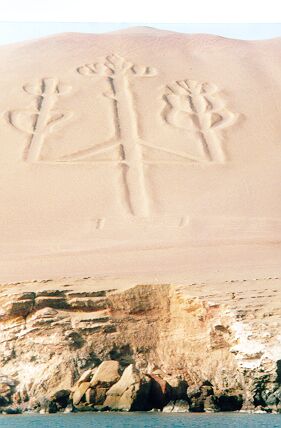 On the islands themselves we saw lots of sea lions, cormorants, condors sunning themselves on the jetties. We also saw a grand total of three penguins on the pebble beaches in some of the more sheltered coves. We were not lucky enough to see any dolphins, and the flamingos tend to be found on another island that was out of reach for our tight schedule.

After that it was back on the truck again. For our final lunch stop we found a layby by the sea, and took the group photos. 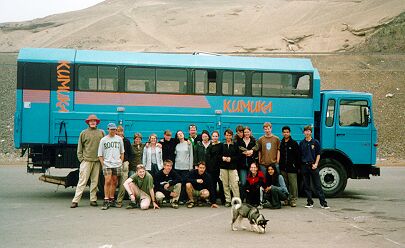 We got to Lima without incident, but for me, Karen & John there was one more hurdle to jump. The five star hotel we had booked and paid for from Britain, the Hotel Crillon, had gone bankrupt a week ago. Hoping we would be able to get the insurance to pay the extra cost, we checked into the Hotel Sheraton instead. We were joined by Ally, who had to delay flying out due to his ear infection and ruptured ear drum, and later by Russel who got "bumped" from his flight - he got to stay in the hotel and fly out business class the next day.

For dinner we wandered into Lima, and ended up eating at either KFC or Pizza Hut.

We spent the day looking for souvenirs. We were going out as a group of twelve, but it took us about two hours to leave the hotel. We came to the conclusion that La Paz was much better (and cheaper) for shopping, but I did find some nice watercolours.

The only restaurants in Lima seemed to be western chains, like McDonalds, KFC, Pizza Hut, or local Fried Chicken places. We tried one of the chicken places for dinner; the meat was served on hot plates with little charcoal burners - and the portions were huge!

We got to the airport in reasonable time, and flew out with no problems - we did know about the 25 US$ airport departure tax in advance. Sorting out the insurance claim for the hotel and sleeping bag theft look a bit longer...