University of Warwick Faculty Fellowships at the Alan Turing Institute: Call for Expressions of Interest 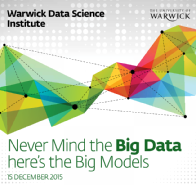