Henry Sara visited the Soviet Union in its early years and captured many memorable images of what he found. A collection of the photographer's Lantern slides are now available to view at Warwick’s Modern Record Centre. Historian Professor Christopher Read explains how Sara’s images defined the Soviet Union at its ‘base line’.

What was life like in early Soviet Union? As Russians established the USSR after the Great War, British left-wing activist Henry Sara visited the country and, during his time there, took photographs of the people, landscape and the emerging Soviet State. Those photographs went on to form part of the Henry Sara Lantern Lectures collection which is now housed at the University of Warwick’s Modern Record Centre. The full collection has more than 1,500 images. Focussing on Sara’s photography from the USSR, Professor Christopher Read from Warwick’s Department of History, takes a look at one photo from the collection - Sara Building Operations in Moscow15b-5-1-12-148 – and offers his thoughts on life in the early days of the Soviet Union.

“Henry Sara was one of many foreign intellectuals who visited the Soviet Union in its early years,” explains Christopher. “Like many such travellers he was a supporter of the Soviet experiment and he was an enthusiast to such an extent that he joined the Communist Party of Great Britain.”

Sara was also a keen and pioneering photographer. The Henry Sara Lantern Lecture’s collection includes hundreds of Sara’s own photos along with a collection of images he put together from commercial sources to support a series of lectures in the 1920s.

“He was an indefatigable traveller and his collection includes many memorable images from Asia,” says Christopher. “He also collected images of Ireland, of pre-war imperialism in the Middle East and Central America and images of historical subjects such as the Paris Commune and the French Revolution. His own images of the Soviet Union in 1925 capture the essence of the collection.”

The Soviet images include photographs of street scenes, of official festivals, of factories, of gleaming, newly-built steam locomotives, of the Russian countryside. There are an iconic subjects such as orphans in state-run residences, young pioneers parading in Red Square, theatrical productions, mass naked sunbathers outside convalescent homes, young men and women playing sports including football, athletics and rowing eights in a regatta on the Moscow River (the rowing images come complete with a shot of the ritual of the winning crew throwing their cox in the air). 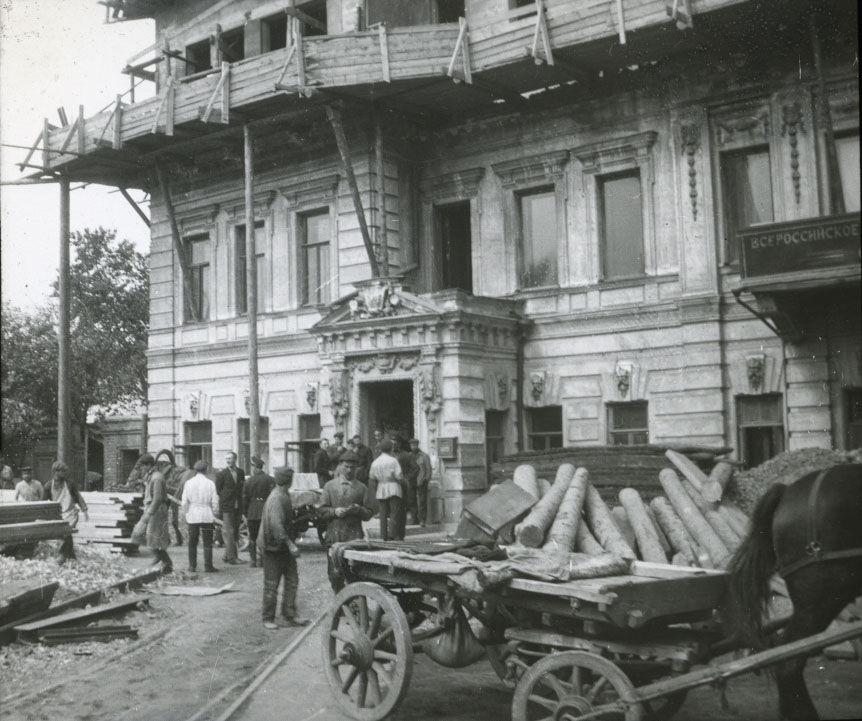 “What unites Sara’s images is that he has effectively defined the Soviet Union at its base line, the point from which it began to develop and change Russia forever,” explains Christopher. “He captures the forgotten moment of the mid-1920s when the traumas of war, revolution, civil war and foreign intervention were being gradually left behind and those that lay ahead were unimaginable. The image ‘Building Operations, Moscow’ encapsulates this central theme of the collection.”

The scene depicts a group of almost twenty men outside an unidentified building in the course of being renovated. Most of the men are talking, one or two puff on pipes and several wear military uniform.

“Not many of them seem to be doing much actual work,” says Christopher. “The scene is dominated by two horses and carts which provide the only motive power (though there are odd-looking items that resemble tramlines heading straight for the front door of the building) and an incredibly flimsy wooden scaffolding held up by only two, long, upright timbers.

“The overwhelming impression created by the scene is one of timeless tradition. Workers wear traditional smocks. Wood dominates not only the scaffolding but also the construction insofar as we can see it. A few details indicate the presence of modern industry, notably a couple of steel girders lie on the floor near the mysterious tramlines. Some of the uniforms and clothing are modern, as are the cloth caps worn by many of the men. Here, then, is a picture of the Soviet Union at point zero, the moment when the devastation of 1914-22 was being overcome and the mass industrialisation had yet to begin. It emphasises how low point zero was on the developmental scale. They show a working class little different from that of the late-nineteenth century.

“It is barely imaginable that only twenty years later, in 1945, this underdeveloped society had produced an army, navy, air force and war effort that had destroyed Nazism and stood astride half the continent of Europe.”