It has just been announced that the University of Warwick has been awarded £2 million from The Wolfson Foundation to help construct a new Mathematical Sciences building.

The full cost of the new building will be around £27 million. It will be built in close proximity to the current Mathematical Sciences facilities and create a space for the co-location of inter-disciplinary research and training for the Computer Science, Mathematics and Statistics departments. 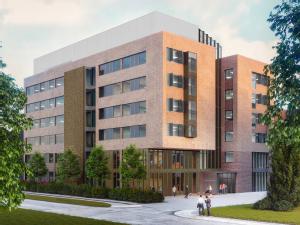 The building will take their “without walls” approach to the next stage, guaranteeing a genuine multi-disciplinary mix of staff and students and further promoting interaction and integration. Construction will begin in the first half of 2017.

Professor Colin Sparrow, Professor of Mathematics and Head of Warwick’s Mathematics Institute said: “The University of Warwick’s Mathematical scientists have substantial world-renowned reputations for pure and applied research, developing new research programmes that make a difference globally. We are delighted with this award which will enable our three departments to grow and to work even more closely together. In particular, the new building will allow us to exploit Warwick’s position as one of the five UK universities recently chosen as partners in the creation of the Turing Institute, including interdisciplinary space for both research and teaching in data science; it will also allow us to bring our graduate training programmes closer together in a new Mathematical Sciences Graduate School. ”

Paul Ramsbottom, Chief Executive of the Wolfson Foundation, said: “The Wolfson Foundation is a charity that only makes awards following a rigorous review process, and our grants are intended to serve as a badge of excellence. The research that will take place within the new Mathematical Sciences building will be of the highest international quality. We are delighted again to be funding Warwick, and the quality of this project is demonstrated by the fact that this is our joint largest award this year.”

By any measure the research conducted within the three departments is of a very high quality. In REF 2014 Computer Science was ranked 2nd in the UK, and Mathematics and Statistics (evaluated together) were 3rd. Between them the three departments currently host a Fields Medal winner (viewed by many as equivalent to a Nobel Prize) and Regius Professorship in Mathematics (the first awarded for over 300 years), seven Fellows of the Royal Society, 11 winners of major research grants from the European Research Council, 11 Royal Society Wolfson Merit Awardees and winners of many other fellowships and prizes.