Nobel Prize winner Dr Randy Schekman has given the keynote speech at the opening of the latest addition to Warwick Medical School, University of Warwick.

Dr Schekman, who was honoured for this pioneering work in the fields of cell physiology and genetics flew in from the States to mark the official opening of the Medical School’s Mechanochemical Cell Biology Building (MCBB) extension.

The new extension houses a new high quality laboratory and space for more researchers to carry out research into diseases such as cancer.

Prof. Jonathan Millar, Head of the Division of Biomedical Sciences said: “The new building is an example of the University's and Warwick Medical School’s commitment to world-class research, training and innovation. MCBB is a first class facility which provides a home for researchers who are investigating solutions to significant global health challenges.”

The new building has been designed to withstand particular environments such as heating and cooling to hold bespoke research equipment.

Dr Randy Schekman is a University Professor in the Department of Molecular and Cell Biology, University of California, Berkeley, and an Investigator at the Howard Hughes Medical Institute. In 2013 he shared for the Nobel Prize in Physiology or Medicine with two other scientists, James Rothman and Thomas Südhof, for their discoveries of machinery regulating vesicle traffic, which is a major transport system in our cells.

Dr Schekman studied the enzymology of DNA replication as a graduate student with Arthur Kornberg at Stanford University. His current interest in cellular membranes developed during a postdoctoral period with S. J. Singer at the University of California, San Diego. At Berkeley, he developed a genetic and biochemical approach to the study of eukaryotic membrane traffic. 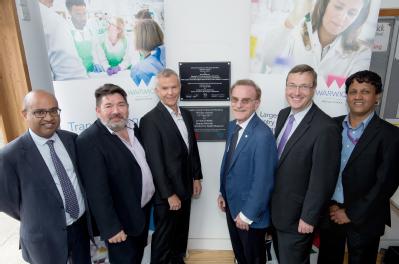 Following the official opening by Vice Chancellor of the University, Professor Stuart Croft, Dr Schekman, gave the keynote speech which examined how cells traffic and export proteins. This function governs cell functions such as hormone secretion and the export of chemical neurotransmitters that allow nerve cells to communicate with each other or control muscle contraction. He also referred to many of the discoveries he has made during his 40 year career. Following the key note speech he met with many academics involved in cell biology.