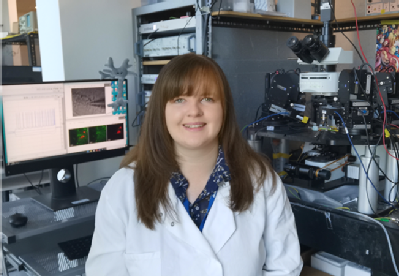 A University of Warwick researcher investigating Alzheimer’s disease has been named as one of four new Race Against Dementia Fellows, with the opportunity to receive support from not only leading scientists studying dementia, but also experts in innovation and problem solving from the world of Formula 1.

The new Fellows will join an existing global team harnessing the ambition and innovation of a new generation of scientists, providing them with funding, support and inspiration to accelerate dementia research.

Three-time Formula 1 World Champion, Sir Jackie, founded Race Against Dementia after his wife of 59 years, Helen, was diagnosed with frontotemporal dementia. The charity works to raise money to fund breakthroughs in dementia research by applying the principles and expertise that have spurred incredible innovation in the fast-paced world of Formula 1 and other high-tech organisations.

Once again, RAD has partnered with the UK’s leading dementia research charity, Alzheimer's Research UK, to identify early-career scientists with the most transformational research ideas.

Dr Emily Hill has been appointed as the Race Against Dementia – Barbara Naylor Charitable Trust Fellow, in recognition of the support given by one of RAD’s funders. Dr Hill will unpick the molecular effects of tau tangles – knots of protein that build up in Alzheimer’s disease and affect nerve cells in a variety of different ways. Dr Hill aims to identify which regions of the tau molecule cause which effects, understanding that could help researchers working to produce targeted anti-tau drugs.

The Fellows are provided with unique opportunities for collaboration with top dementia scientists as well as high-level mentoring and development from experts outside the field such as the Red Bull and McLaren F1 teams.

Dr Emily Hill from the School of Life Sciences and Institute of Advanced Study at the University of Warwick said:

"I am thrilled to have the opportunity to continue working the field of neurodegeneration and delighted to have been awarded a Race Against Dementia fellowship. My project will investigate the role of tau, a protein known to disrupt the function of neurons in the brain in the early stages Alzheimer’s disease. Tau is known to form clumps inside of neurons and I have previously shown that it can alter their function and how they can communicate with other neurons. My project will explore the mechanisms behind these changes, and I hope that this new knowledge and understanding will highlight novel targets for treating Alzheimer’s disease in the future.

“This fellowship provides a unique and fantastic opportunity to working alongside Formula One partners who are experts in innovation and problem solving. I look forward to networking and building further worldwide collaborations to accelerate research progress. My dad has battled Parkinson’s disease for the last 15 years and I have witnessed first-hand the devastating effects that these complex disorders have on both patients and their families. I very grateful to Sir Jackie Stewart for his drive and passion to beat Dementia and for putting together this fantastic program to develop early career dementia researchers. I am excited to contribute to solving the big puzzle of Dementia and try to reduce the heartbreak and suffering of future families.”

“I am delighted to announce the appointment of RAD’s four new young Fellows - they are each very talented scientists and will be a great addition to the RAD team. By working together and with the development support that RAD can provide I hope they will be able to make real progress in the fight against dementia. Our thanks go to everyone who continues to support financially Race Against Dementia in helping us to accelerate dementia research.”

“We are delighted to work with Race Against Dementia to support these outstanding early career scientists. As well as providing the funding to explore cutting-edge research ideas, the RAD Fellowships offer world-class personal and professional mentoring and opportunities to learn from sectors and industries outside of medical research.

"Without new treatments or preventions, one in three children born this year will develop dementia in their lifetimes. It is our greatest long-term medical challenge, and we urgently need to bring more minds to bear in order to tackle it. We’re incredibly grateful to Sir Jackie for his support of these young dementia researchers and the innovative research that will make breakthroughs possible."

Photograph of Dr Emily Hill available to download at: https://warwick.ac.uk/services/communications/medialibrary/images/september_2021/emily_hill.png