A technician from the University of Warwick has won a prestigious Papin Prize at the HETS (Higher Education Technicians Summit) conference in Birmingham on the 25th June 2019.

Steven Hindmarsh from the University of Warwick was given the award for technical excellence in supporting a Core Research Facility – The Electron Microscopy Research Technology Platform. 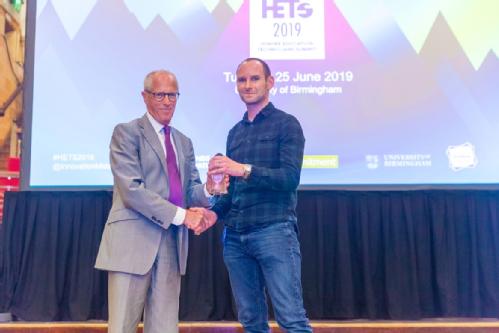 The award was presented at HETS 2019, which aims to share best practice amongst higher education technical staff in UK, Ireland and beyond, and is the largest event of its kind in the country, with over 700 technicians attending.

Steve has rapidly progressed to Senior Research Technician in the EM Research Technology Platform (RTP). The quality of imaging has enabled material measurements not deemed possible before. He is known for his ‘willingness to get stuck into problems.’ He comments:

“I am delighted to have won a Papin prize for my work in Electron Microscopy Research Technology Platform. I’ve been at Warwick for 8 years, and much of my time is spent using the microscopes for both internal research and external industrial work. On a daily basis, I run maintenance and troubleshooting duties help keep the facility running smoothly, and to be recognised in this way is very rewarding.”

Professor Stephen Jarvis, Deputy Pro-Vice Chancellor for research at the University of Warwick comments:
“I am absolutely delighted that Steve Hindmarsh has been recognised with this year’s prestigious Papin Prize at the 2019 Higher Education Technicians Summit. Steve joined Warwick as a trainee technician in 2011 and has been at the forefront of developments in Electron Microscopy since then. He is now a leading expert in atomic force and FIB-scanning electron microscopy and supports hundreds of undergraduates, postgraduates and PDRAs through world leading training and research.

Speaking about the Papin Prizes, Kelly Vere, Technician Commitment lead for the Science Council, said:
“This year, the standard of entries for the Papin Prizes was incredibly high, so all of the technicians and technical teams that have been nominated for the awards should be very proud of their achievements.”

Dr Helen Turner, Director of Midlands Innovation, added: “I am particularly delighted that we have had so many entries for the Papin Prizes from right across the UK. This demonstrates that the excellent work which technicians do throughout the country is greatly appreciated by their work colleagues and students. I am pleased that through HETS and the Papin Prizes we are able to support technicians in HE and recognise their achievements.”

The award recognises continued excellence and/or significant achievements across an individual's technical career.

Professor Lord Bhattacharyya was passionate about tackling the UK’s skills shortage and highlighting the important role of technicians in contributing to internationally-leading education and research. He also recognised their role as ambassadors for science and engineering.

For more information about HETS and the Papin Prizes, visit http://www.midlandsinnovation.org.uk/

For more information about the HETS conference, contact Kelly Vere at the Science Council email: K.Vere@sciencecouncil.org

About Midlands Innovation
Midlands Innovation is a world-class research and innovation partnership, combining the collective excellence of eight leading universities in the heart of the UK – Aston, Birmingham, Cranfield, Keele, Leicester, Loughborough, Nottingham and Warwick. It unites the power of university research with the unique strengths of Midlands industry to drive cutting-edge research, innovation and skills development.