In this thesis, I uncover the history of the Mental Hygiene Movement in Republican Shanghai. I show that it was far-reaching in the city and that it held a leading position in national mental hygiene promotion, an influence on other cities like Canton, Peking, and Chongqing. This movement could be dated from the 1910s but achieved dramatic expansion in the 1930s before being attenuated in warfare in the 1940s and coming to an end with the foundation of the PRC. Chinese intellectuals and foreign missionaries and experts, despite their different aims, jointly promoted this movement, and it reached out to the Chinese populace through the public media. Mental hygiene arose from the conjuncture of a new understanding toward the mind and mental problems, the establishment of asylums and psychiatric hospitals, and new tools of mass publicity available to government and a range of non-governmental institutes. In addition, development in Shanghai was powerfully shaped by politics and ideology. Initially, mental hygiene emerged in relation to a colonial aim of regulating the unwanted on streets and creating public hygiene and order. Subsequently, Shanghai would increasingly see a strong revolutionary and political influence in remoulding the ‘national’ mind. In particular, nationalism and modernism were powerful factors in development. More generally, the progressive ideology of scienfication lay behind the development of disciplines and clinics.

Development in Shanghai was part of the international history of mental hygiene, but it also demonstrates the importance of locality. For both Chinese governments and the populace, the significance of the Mental Hygiene Movement was more symbolic than pragmatic. The ideological project of remoulding the mind outweighed medical research and treatments in mental illnesses. I argue that the reason psychiatric policies were not facilitated in China on a large scale was the lack of a powerful government force. The acceptance of mind remoulding and self-improvement, however, was more pervasive. One reason for this was that it benefited from the inheritance of a tradition of self-introspection. The Chinese Mental Hygiene movement, therefore, reflected novelty and Western influence but also a convention. Intellectual radicalism was questioned in the process of popularisation and was modified to become more pragmatic in line with everyday practices. Traditional thinking about the mind, while under fierce critique from the modernisers, showed resilience in compromising and integrating with new knowledge and ideologies. 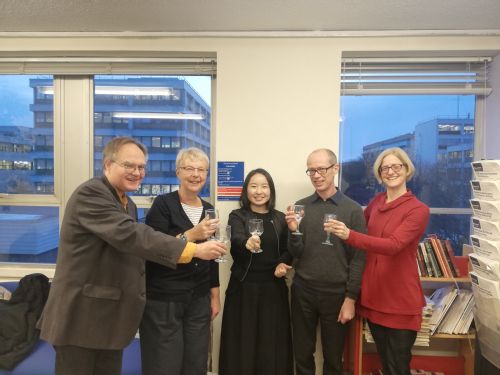 An article by Dr Angela Davis, Wellcome Trust Research Fellow and CHM staff member till August 2018, has been chosen by Studies in History of Biological and Biomedical Sciences (Elsevier) on its 20th anniversary, as one of its top twenty articles from the last 20 years, based on a range of metrics including citations, downloads, and other factors. Angela's article is 'Wartime Women Giving Birth: Narratives of Pregnancy and Childbirth, Britain c.1939– 1960' (2014).

As a service to the community of scholars in history, philosophy, and social studies of biology and medicine, and others interested in these fields, the articles will be provided as free to access until the end of 2018 and featured over the coming months in the journal's podcast Bioviews: https://bioviewspodcast.com/