This digital concert series is a University of Warwick Global History and Culture Centre and Early Modern and Eighteenth-Century Centre collaboration with the Oxford-based baroque orchestra, Instruments of Time and Truth.

We will record a programme of high-quality solo performances with short introductory talks to be premiered ‘live’ on social media to enable engagement between performers and audiences in a recognisably concert-like setting. If COVID-19 conditions allow, we will also record a chamber group concert in an eighteenth-century setting to be streamed in the same way. This ‘live’ premier will be a way of approximating a sense of a community coming together to experience music with one another. The concerts will also be recorded for return experiences on the Warwick, IT&T and other music websites. The concerts address the situation of classical musicians during Covid-19, and innovative practices in digital performance. The concert series theme connects eighteenth-century London as a European cultural centre to the city as a centre of empire. A culturally-diverse musical society included composers and performers, audiences and benefactors from Europe and the Atlantic world. ‘Musical Culture and Empire’ brings musical culture to our histories, and the digital concert series supports our musical cultural sector.

Instruments of Time and Truth, described on BBC Record Review as 'an absolutely superb band of instrumental soloists', was founded in 2014 by musicians Gabriel Amherst and Judith Evans to provide a platform for international performers resident in and around Oxford. Established on a community-driven model, the ensemble has both put on a series of innovative explorations of Baroque repertoire, and assumed a significant role in underpinning the tradition of collegiate and community choral excellence in Oxford. IT&T has also performed further afield, putting on performances of Handel’s little-known oratorio “The Triumph of Time and Truth” in London and Tetbury, as well as giving regular concerts in Spain and Malta. In 2019 IT&T's ground-breaking 'InSpires' education project, with its extensive programme of courses, coaching, and individual tuition, was awarded the OMEP Music Partnership Cup at the Music Hub Gala Awards. 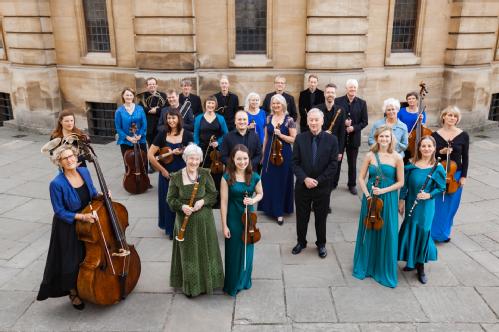 The IT&T orchestra in front of the Sheldonian in Oxford.