'Sculpture Victorious' exhibition opens in the US.

A major exhibition co-curated by Michael Hatt opened in the United States last week.
Sculpture Victorious: Art in an Age of Invention, 1837-1901 has been organised by the Yale Center for British Art, in partnership with Tate Britain, where the show will travel in the spring. 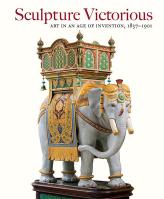 Co-curated by Professor Hatt with Martina Droth, Associate Director for Research and Curator of Sculpture at the YCBA, and Jason Edwards, Professor of History of Art at the University of York, Sculpture Victorious is the first ever exhibition exploring the history of Victorian sculpture. It examines the making and viewing of sculpture in Britain and its empire during the reign of Queen Victoria, revealing not only the inventiveness and ubiquity of sculpture, but also its profound cultural and political significance. It includes a rich array of works, including figures and reliefs in marble, bronze, silver and wood, as well as gems, coins and medals, cameos, and porcelain objects.
The exhibition is accompanied by a catalogue, edited by Droth, Edwards, and Hatt, and published by Yale University Press.
The exhibition runs from September 11 to November 30 at the YCBA, and will be at Tate Britain from February 25 to May 25 2015.
Mon 22 Sep 2014, 20:36 | Tags: Exhibitions, Public Engagement, Impact, Research, General