Basil Spence: Sketchbook of buildings and monuments in Spain & France.

A sketchbook containing Basil Spence's sketches of a trip to Spain and France in 1959 has been acquired by Historic Environment Scotland (formerly RCAHMS). Some of them were published in RIBA Journal in 1959 as 'Nine Pages form the President's sketchbook'.

Gavin Stamp, who died on 30th December 2017, gave the plenary lecture at the project conference on Architecture, Diplomacy and National Identity held at the British School at Rome in 2008. Invited to speak on the topic of Lutyens and Spence, he rose to the challenge with gusto and his lecture provided a wonderfully erudite and engaging start to the conference. (see Conferences: Rome for the text) Gavin proved a stimulating and congenial companion for the next two days of papers and visits before he was whisked off to L’Acquila by his former student Andrew Hopkins.

Gavin recently wrote in his Private Eye column about the Foreign Office’s ill-advised proposal to sell Spence’s Rome Embassy building. Gavin never hesitated to blow the whistle on such projects and warn of the adverse consequences - for architecture, people, and cities - of uncontrolled property development. His death represents a huge loss to architectural history and the conservation movement.

The British Architectural Library Drawings Collection has accessioned a perspective of the Downcast Tower, Selby Colliery, drawn by Nigel Grimwade in 1978 when he was in the office of Shepherd Fidler.

Louise Campbell: 'A background sympathetic to young and energetic minds'.

Emeritus Professor Louise Campbell will be giving a paper on Sussex University on 15 June at the Oxford Brookes conference 'Architecture Citizenship Space: British Architecture from the 1920s to the 1970s', The paper is entiltled "'A background sympathetic to young and energetic minds’: forming modern citizens at the University of Sussex'".
Tue 30 May 2017, 10:25 | Tags: Conference, General

Nigel Grimwade, who has died at the age of 85, worked in the Spence practice during its heyday in the 1960s. He studied first at Cheltenham College of Art and then at the Architectural Association in London. It was via his friendship with Gordon Collins at the AA that Grimwade came to work for Basil Spence in 1960.
Grimwade worked first at the Canonbury atelier and then at 1 Fitzroy Square, where he and Francis MacKenzie assisted Gordon Collins in realising the first buildings at the new University of Sussex, namely Falmer House, the Physics Building and the Biology Building. After Sussex, he worked with Collins and Francis MacKenzie on the design of the Salters Hall in the City of London.
A very modest man but at the same time lively, engaging and of great personal charm, Grimwade took part in the 2008 conference Sir Basil Spence re-viewed: the architect and his office. He gave generously of his time to describe the way in which Modular Concrete (a division of Wates) set up a casting yard on site to make the thin vaults and curved edge beams which gave the buildings of the first phase of Sussex University a distinctive architectural character and superb standards of finish. This amounted to an almost craftsman-like approach to concrete. Grimwade also underlined the role of Collins at Sussex and the importance of the Spence Bonnington & Collins office in bringing to completion the teaching buildings at Sussex, Southampton and Exeter University. These insights enriched the AHRC team’s understanding of the overall organisation of the Spence practice and helped to inform the chapters about the history of the office and about English university design in our book Basil Spence buildings and projects.
After Collins’ retirement in 1972, and Jack Bonnington’s move to Tyttenhanger House, Grimwade left the practice. Latterly he worked for the Brown Matthews Partnership in Warwick, where among other projects he was responsible for detailing the new Cathedral Library at York Minster.
He was a keen photographer, and in 2008 produced a box of slides documenting the early stages of building Sussex University, and an office outing to Spence’s weekend house at Beaulieu in the 1960s. These will eventually be passed to the Sussex Special Collections and RCAHMS.
BELOW: Nigel Grimwade, perspective of the Biology building at Sussex University (in collection of RCAHMS). 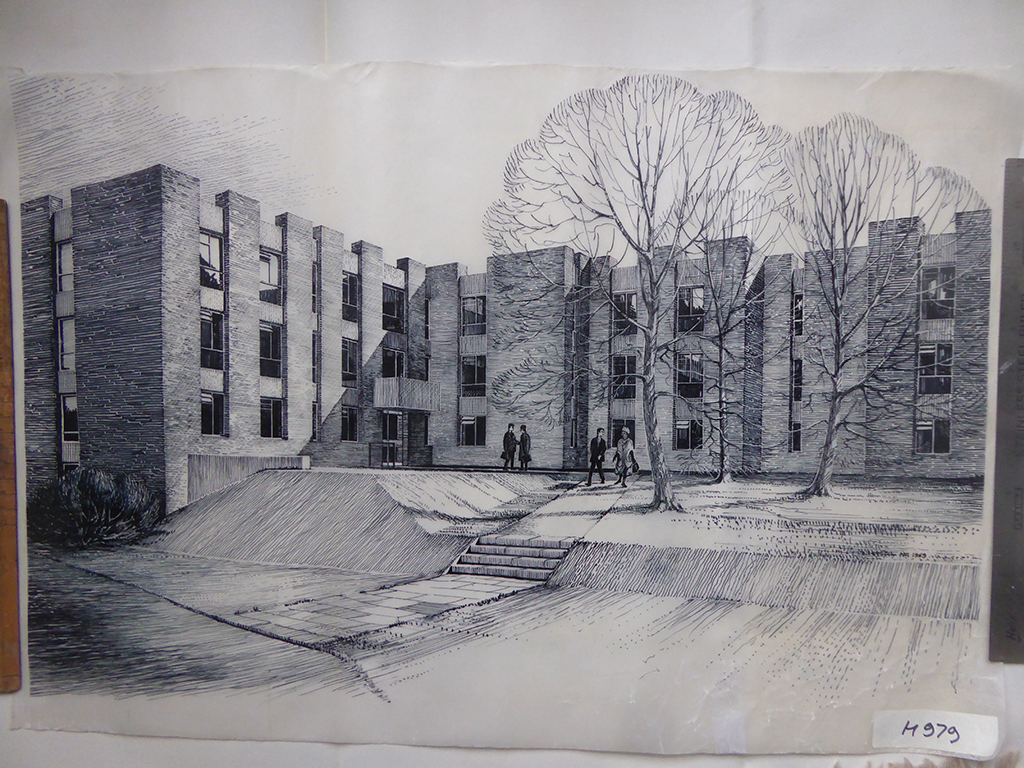 English Heritage has just added the churches of St John Willenhall and St Chad Wood End to its listed buildings register. With the recent listing of St Oswald Tile Hill (added to list in October 2014) this means that all of Basil Spence’s churches in Coventry are now protected. They were nominated by Louise Campbell, supported by the Twentieth Century Society. 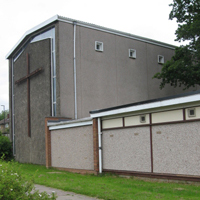 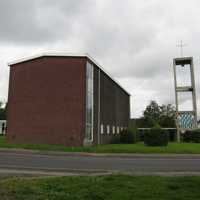 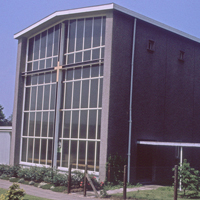 The Swiss Cottage Library in north London (Spence, Bonnington and Collins) was opened 50 years ago. It was planned as part of a large complex which included a swimming pool (now demolished ). A later, more ambitious scheme for Camden Council comprised a civic and cultural centre and a hotel (see David Walker's essay on Civic Centres).

Jack Bonnington, who played a major role in its design, and David Walker, who researched the project for of the Basil Spence AHRC research project, spoke at an event organised at the Library on 12 November. An exhibition to mark the anniversary was displayed in the Library last year.

Geoffrey Clarke died on 30 October.
Clarke was one of the youngest of the talented team of artists who worked at Coventry Cathedral (Patrick Reyntiens is now the sole survivor). Clarke designed three of the nave windows, the high altar cross and candleholders, the canopy in the Guild Chapel and the flying cross on the fleche of the new Cathedral. He was one of Spence's favorite sculptors and produced magnifient site-specific sculptures for many of his other buildings, namely Thorn House, the Physics buildings at Liverpool, Newcastle and Exeter University, and Spence's own house at Beaulieu.'
An obituary by Charles Darwent for The Guardian newspaper can be viewed here.
Wed 12 Nov 2014, 11:35 | Tags: Obituary

Go to our project images page for this building.

English cathedrals and monasteries through the centuries: an interactive DVD-ROM produced by University of York/English Heritage in 2013 contains contributions by Louise Campbell on the new Coventry Cathedral and Sarah Walford on 20th-century cathedral architecture.