We had drinks in Paddy Flaherty's Irish Pub, where I got to try the national cocktail, Pisco Sour.

The main plaza in Cusco:

In the morning we had a briefing for the Inca Trail. John and I had the doctor round about our diarrhoea which had started about Monday, and spent the afternoon looking for an open pharmacy. Most people went to look at the Inca ruins of Saqsaywamen which was an important temple. There are some fine examples of Inca stone work without cement - this type of work was reserved for important temples only.

Two watercolours of Cusco which I bought later in Arequipa: 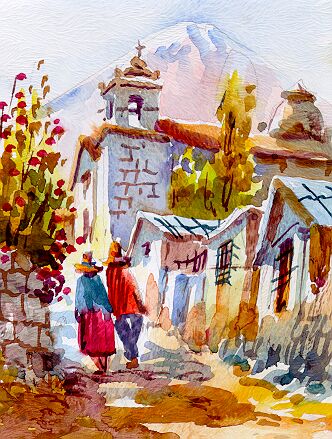 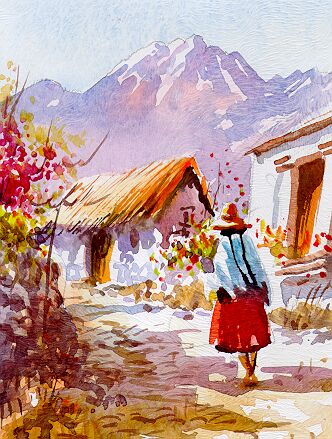 Kumuka had subcontracted the Inca Trail to the local company, United Mice Tours. In the morning we left at six for a long drive to the start of the trail at the railway station Km 82. We stopped for breakfast at a restaurant in the town of Ollantaytambo. According to the guide books this was built on top of an Inca town, and still has the Inca stonework as foundations, at the foot of some spectacular Inca ruins and terraces. We didn't get to see these.

On getting out of the bus at the train station (Km 82) we were immediately mobbed by women trying to sell us hats, water, and water bottle carriers. We crossed the river by suspension bridge and started walking. The first ruins where Llaqtapata (2282m), a large village with farming terraces, believed to supply other sites with food. We had lunch overlooking the site, and then headed south to camp near the village of Huayllabamba (2950m). The porters had, of course, made better time than us and the tents where all set up waiting for us.