This was probably the hardest day's walking, a long climb us to Warmiwanusqa Pass (4200m), or Dead Woman's Pass. The last stretch was particularly tiring - almost a case of taking a few steps and then stopping to get one's breath back. We had a good rest here while the rest of our group made it to the top. The pass seemed quite clean, but exploring up on the north side reveals two massive pile of litter, some of collected in black bin bags. 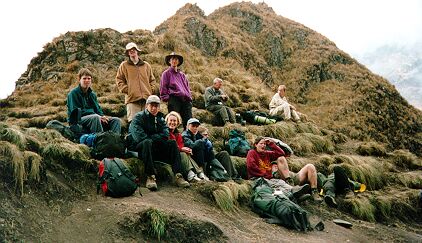 After a ascent of 1200m, we had a 600m descent down the Inca paved path - stone steps almost all the way. Jenny slipped, grazing her knee and twisting her ankle on the way down. We had hot pasta for lunch in the Pacamaya Valley. Gareth and Peter went off to look at hummingbirds, orchids and other little flowers.

We then made our way up to the circular ruins of Runkuracay, which was probably a food store or post house, which we camped by (although my guide books says it is no longer permitted to camp here, it was a very nice location). For dinner the cook excelled himself - pop corn for starters, and a rum and cinnamon tea after dinner.

The view from the campsite: 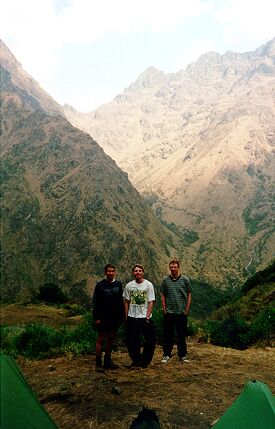 After a filling breakfast of pancakes and porridge we made our way up to the next pass (3850m) and into the cloud forest. We should have got spectacular views of Pumasillo (6246m) and the Vilcabamba range but it was very cloudy. 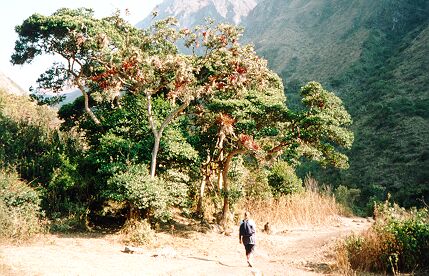 Our first ruin for the day was Sayacmarca (3600m) (Inaccessible town), perched on the side of the ridge overlooking the (cloud filled) Aobamba valley.

Peter and Andy in Sayacmarca: 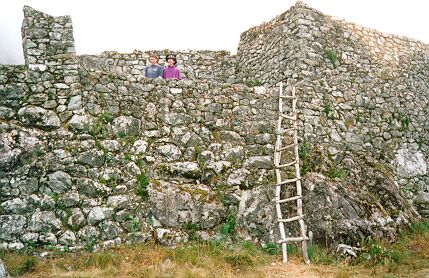 Just below Sayacmarca lies the small site of Conchamarca (Shell Town) which has had its thatch roof work restored.

We then had a pleasant gentle ascent up the side of the valley admiring the mossy trees and flowers of the cloud forest. We had lunch above the ruins of Phuyupatamarca (3650m) (Cloud level town).

It was then another long descent of 900m to the campsite by the bar and restaurant near the ruins of Winay Wayna. This was also a chance for a hot shower and cold beers.