A long day's drive with nothing special to see, our first nights camping was by a river in the middle of nowhere. We arrived at dusk and had to put the tents up in the dark by torch light on what seemed like a pebble beach. It was either too sandy to hold a peg, or nearly impossible to get the pegs in. Some people resorted to holding the tents down with rocks. That day's cook team had the pleasure of pealing about fifty potatoes to mash to go with the steak. I was most impressed with dinner, and ate four steaks - the loss of appetite due to the altitude seemed to be leaving me. 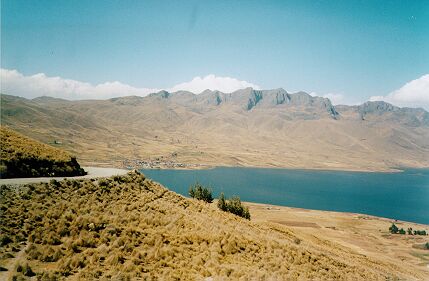 The truck and lots of our group out looking at llamas: 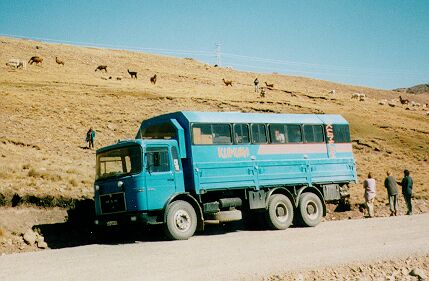 Some quite impressive rock formations, almost looks man made... 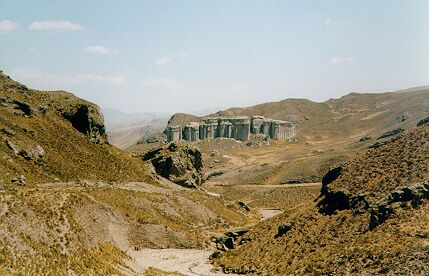 This is a llama pen, a larger version of a sheep pen: 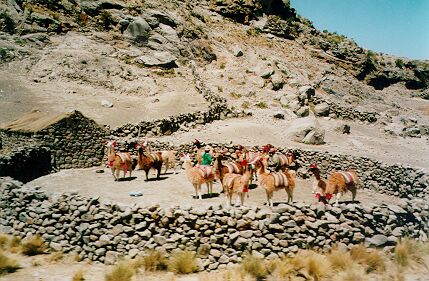 Zooming in on the last photo:

We got to the hot springs near Chivay at lunch time. We where then put on a hired local bus to take us to see Colca Canyon, and back again. This was an interesting drive - due to a dodgy connection the driver had his little daughter standing on the battery terminals when starting the bus or using the headlights (which we needed for a long tunnel and the drive back). We got out at the view point and looked at the canyon. Its about twice as deep as the Grand Canyon (it was thought to be the deepest in the world until the nearby Cotahuasi Canyon was found to be 163m deeper), but shaped like a steep valley. The view of the canyon was a bit disappointing, you can spend days trekking there, but the condors flying overhead where quite good.

The group at the view point:

After dinner about half the group went down to the hot springs - basically a swimming pool fed by hot sulphury water from the springs. We spent the evening loafing, drinking cold beer and playing water polo.