The question of whether there is a connection between income and psychological well-being is a long-studied issue across the social, psychological, and behavioural sciences. Much research has found that richer people tend to be happier. However, relatively little attention has been paid to whether happier individuals perform better financially in the first place. This possibility of reverse causality is arguably understudied. Using data from a large US representative panel we show that adolescents and young adults who report higher life satisfaction or positive affect grow up to earn significantly higher levels of income later in life. We focus on earnings approximately one decade after the person’s well-being is measured; we exploit the availability of sibling clusters to introduce family fixed-effects; we account for the human capacity to imagine later socio-economic outcomes and to anticipate the resulting feelings in current wellbeing. The study’s results are robust to the inclusion of controls such as education, IQ, physical health, height, self-esteem, and later happiness. We consider how psychological well-being may influence income. Sobel-Goodman mediation tests reveal direct and indirect effects that carry the influence from happiness to income. Significant mediating pathways include a higher probability of obtaining a college degree, getting hired and promoted, having higher degrees of optimism and extraversion, and less neuroticism. 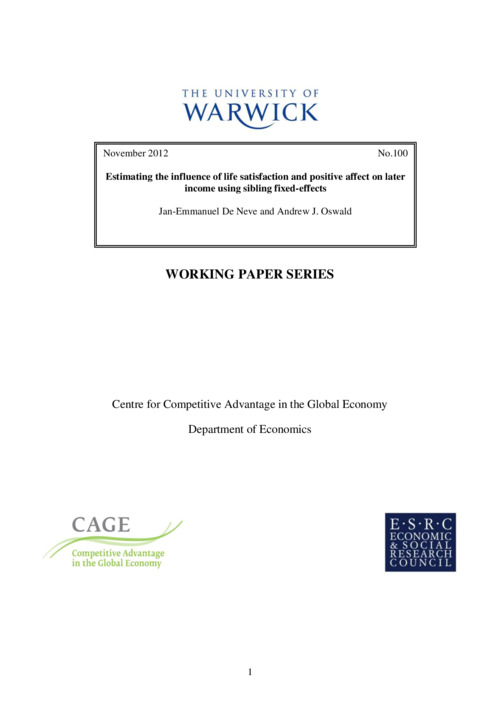