Online platforms provide an opportunity for individuals to fundraise for their favourite charities and charitable causes. In recent years, individual charity fundraising through these platforms has become a mass activity. Using JustGiving, the UK’s biggest charity fundraising platform, 21 million people have raised £1.5 billion for over 13,000 charities and causes since the website was set up in 2001.Recent figures suggest that online donations are still a relatively small part of overall giving; an estimated 7% of the total dollar amount given in the US and used by 7% of UK donors. But online and text giving are growing at a faster rate than total donations, indicating that this share will grow. In this paper, we present insights on individual fundraising from micro-econometric analysis of JustGiving data. The analysis exploits a number of different data sub-samples. The largest comprises 416,313 fundraisers who were active JustGiving users at the time of an online survey that ran from October 2010 – April 2011. We also analyse data on 10,597 fundraisers who ran in the 2010 London marathon and from a sample of 39,238 fundraisers who had linked their fundraising pages to their Facebook page. Details on all these samples are given in the Appendix. The focus of the analysis is what determines fundraising success. The "perfect ask" in the title of the paper suggests that there may be a winning formula that could easily be replicated. In practice, much of the power of individual fundraising comes from its very personal – and idiosyncratic – nature, but there may nevertheless be some useful lessons to be learned from studying how fundraisers and donors behave. A "typical" fundraising page (the median) has 14 donations and raises £245. But, as shown in Table 1, there is substantial variation in the number of donations and the amounts raised. The top 10% of pages raise £1,343 or more; the bottom 10% manage less than £38. In this paper, we show that at least some of this variation can be linked to specific factors having to do with the individual’s fundraising strategy (for example, the type of event they do and whether or not they set a fundraising target). We also show that social interactions are crucially important – whether between the fundraiser and donors or between donors. Individual fundraising is a uniquely personal and interactive form of fundraising, introducing new social dynamics into fundraising. 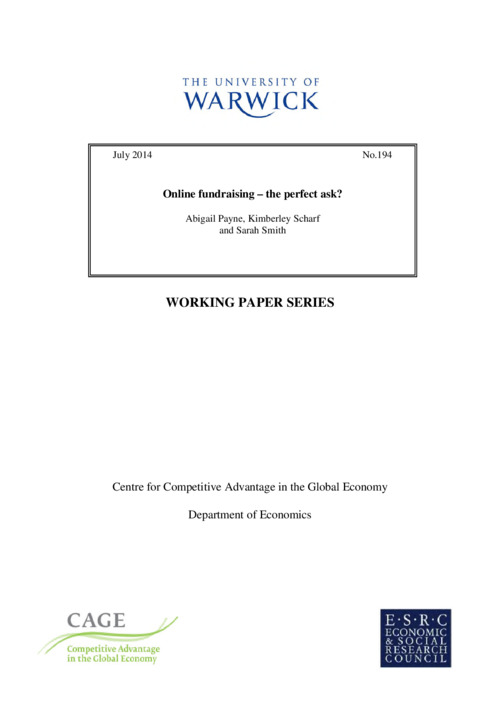