As the UK Government starts to recommend the wearing of non-medical face coverings in enclosed spaces, Professor Helen Spencer-Oatey and Professor Perry Hinton from the Centre for Applied Linguistics look at how mask-wearing became the norm in other cultures and consider what lessons this might have for the UK.

Culture and face masks – are the two connected? Part 1: The East Asia Context

In the attempt to reduce the transmission of the Covid-19 virus, the public wearing of face masks has been encouraged around the world. However, news images of public spaces show that the practice has been adopted to a very different extent in different countries, with the highest frequency of use in East Asia. Ralph Jennings commented in an article in March 2020 that in Asia the wearing of face masks is “ingrained in their culture”, saying “Asians have worn face masks for decades.” 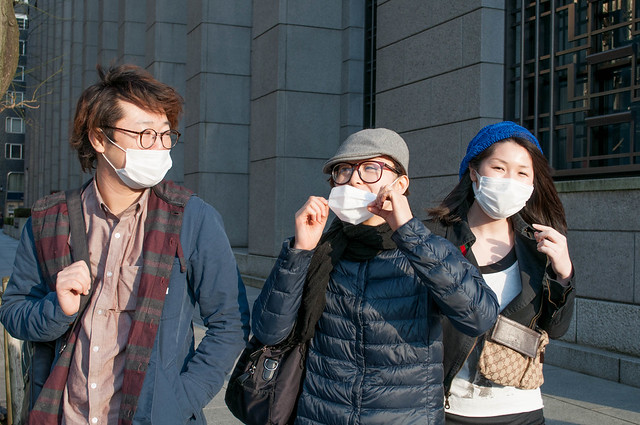 In this two-part article we consider the reasons behind the wearing of face masks in East Asian countries and the implications for their take-up in Europe (examined in part 2).

Over the last 100 years or so, there has been a series of major health alerts in East Asia that, according to newspaper articles and other sources at the time, triggered the wearing of masks. These have included the following influenza/viral outbreaks:

In addition, the wearing of face masks has been linked with concerns over pollen count and air pollution. In the 1970s, there was a significant amount of tree planting in Japan and afterwards there was an increase in hay fever in the general population, which led to more people wearing masks. Natural disasters triggered a similar response in Japan, including the 1923 Great Kanto earthquake, which resulted in large amounts of smoke, ash & air pollution for weeks afterwards. In 2011 the Tōkohu earthquake and tsunami, along with damage to the Fukushima Daiichi nuclear power plant, affected air quality, including an increase in radio-active particles in the air. The wearing of masks increased after both these events.

The above health alerts led to an increase in the number of people wearing face masks in public. Part of this was a spontaneous response, but it was also strongly promoted through health campaigns and regular reminders. For instance, Lau and colleagues, writing in 2008 with respect to SARS and avian flu, reported that the Hong Kong government urged people to use face masks when they had flu-like symptoms, both during the SARS epidemic and as a component of community preparedness for anticipated avian flu. They further explain:

“Announcements of public interest were broadcast regularly on TV and very frequently (almost hourly) in train stations to promote mask use when having influenza like illnesses (ILI). The governmental position on mask use when having ILI symptoms is therefore clear and consistent.”

Today, as we face the Covid-19 pandemic, the Centre for Health Protection in Hong Kong currently lists ‘mask’ as a ‘hot search’ at the top of its site. Clicking on it gives 996 results. The top entries provide information and instructions on the proper use of masks, including how to wear them and how to take them off. There are also videos to illustrate and explain these various issues.

Government interventions on masks have also been widespread in Japan. In an article published in 2012, Burgess and Horii report that in the 1990s the Japanese government started emphasising individual responsibility for healthy lifestyles. In 2000 it launched its third initiative ‘Healthy Japan 21’, and the Health Promotion Act of 2002 asserts that “the active monitoring of health and engagement in health promotion are the duty of each citizen.” At the time of the 2009 swine flu epidemic, the campaign posters stated: “The spread of the influenza must be prevented by each individual!”

In May 2009, the first cases of swine flu in Japan were confirmed in the city of Kobe, where 3 children were infected. A television report showed the school’s headmaster talking to reporters wearing a mask, and reporters broadcasting from outside hospital, were also masked. Burgess and Horii argue that “In retrospect, May 2009 was the tipping point when masks both helped stimulate a degree of panic and established their role at the frontline of protection.”

Around the same time, a major producer of face masks, Unicharm, started a series of advertising campaigns around ‘self-healthcare promotion’. Two poster campaigns in particular extended the association of mask-wearing to the family and the economy. One poster, ‘Family masks of Japan’, showed a 3-generational family in which mask-wearing embodied care and love between family members. The other, ‘Virus Guard for those who cannot have a rest’ showed people in different occupations all wearing masks on a commuter train, symbolising their sense of responsibility and duty of workers towards their job. Burgess and Horii comment that “by guarding their bodily boundaries these workers ensure that their contributions to the economy are not interrupted by catching the flu. In short, a good Japanese worker and family member wears a mask.”

So why wear face masks?

Yang, in a magazine article published in 2014, argues that face masks now fulfil multiple purposes in East Asia. For young people in particular, they can be symbols of fashion, as demonstrated by designer masks on the catwalk at China’s fashion week in 2014 – smog couture. Young people may also use them to avoid attention from other passengers on public transport, signalling a desire to avoid any communication. Other reasons cited include to keep warm, to avoid getting sun tanned, and to cover up the face when someone does not have any make-up on. 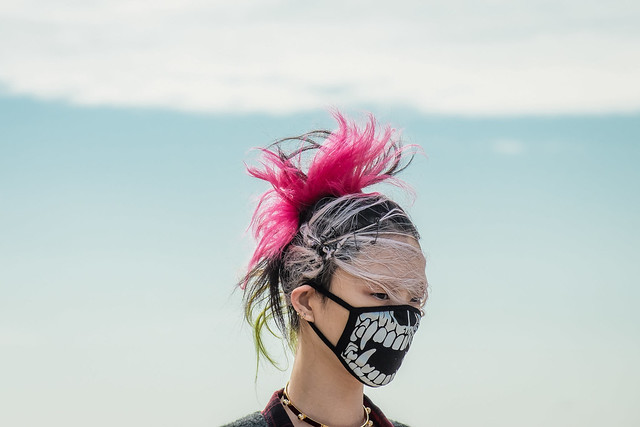 Referring to Japan, Burgess and Horii conclude as follows:

“Mask-wearing is not only an externally imposed demand but appears to have become an embedded social practice as part of the armoury of individual responsibility for good health. An originally collective, targeted and science-based response to a public health threat has dispersed into a generalised practice lacking a clear end or purpose.”

So, is this cultural? Yes, in so far as it represents a common practice that is widely approved of and promoted by many different segments of society. In East Asia, putting on a face mask is a typical public response to the Covid-19 crisis. It is both a descriptive norm (i.e. large numbers of people wear masks) and an injunctive norm (i.e. the wearing of masks is socially approved of and expected) (See our articles on norms). As a result, both norms are consistent and the behaviour is doubly reinforced. In other words, seeing others wear masks encourages non-wearers to follow suit – partly in the assumption that it will have benefits (since it is presumed others know the benefits), partly to avoid being the odd one out, and partly to conform to what others expect.

What then are the implications for Europe, when our history and norms for wearing masks has been so different?

We will consider that in Part 2 of our article.