With vehicle-to-grid (V2G) technology, electric vehicle (EV) batteries could store electricity - when there is an abundant supply - to power homes and businesses and discharge it back to the national grid when it is most needed.

This enables better use of renewable energy, lower carbon footprint, less pressure on the grid and financial savings, which can help electric vehicle owners pay back their investment. 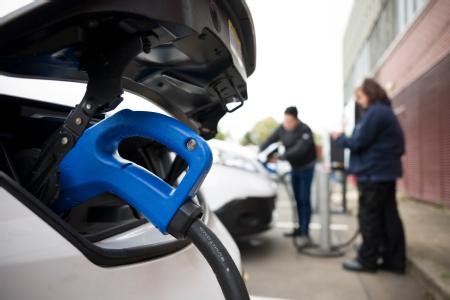 During the course of this year, the EV-elocity project has been deploying V2G chargers in a range of locations across England to as part of large-scale trials to gain technical, customer and commercial insights on the emerging technology. It is also investigating if, and how, additional use from V2G charging may affect EV battery life.

The project, led by Cenex, a not-for-profit consultancy specialising in delivery of low carbon vehicles and energy infrastructure projects also involves the Universities of Nottingham and Warwick; Leeds and Nottingham City Councils; and CrowdCharge, a platform that integrates and optimises smart electric vehicle charges. EV-elocity is funded by the Department for Business Energy and Industrial Strategy (BEIS) and the Office for Zero Emission Vehicles (OZEV), in partnership with Innovate UK, part of UK Research and Innovation.

Chris Rimmer, Infrastructure Strategy Lead at Cenex, said: “After restarting the project in mid-2020, we are delighted to be testing V2G with such a range of sites and hardware. We’ll be working hard over the coming months to examine the cost, carbon and conditioning benefits of V2G, and publish our results as they become available.”

Professor James Marco, from WMG at the University of Warwick comments: 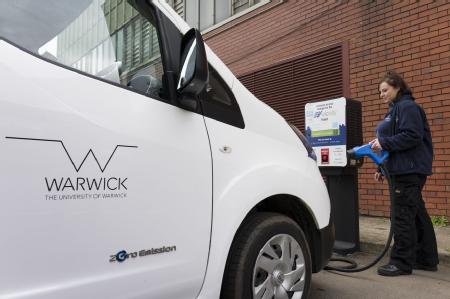 “A number of consumers and vehicle manufacturers are concerned that V2G will disproportionably reduce battery life, representing a potential barrier for widespread adoption of V2G and consumer acceptance. Here at WMG, University of Warwick, we are excited to be researching novel new methods of managing the V2G charging process not just to mitigate battery degradation, but to potentially use V2G to extend battery life.”

With V2G technology, EVs could help to support grid resilience when parked and plugged-in. Instead of installing huge and expensive community battery stores, an extensive network of EV batteries could be harnessed to absorb energy when renewable generation is plentiful and export it back to the grid during peak demand when carbon intensity is highest for a profit, making money back for users in the process.

The project is installing multiple V2G charging demonstrators at sites owned by organisations -including city councils, universities and police forces - that employ large electric vehicle fleets. Latest data suggests that if the 5.3 million fleet vehicles on UK roads today were to switch to EV, it would save as much as 25 per cent of all UK transport emissions. 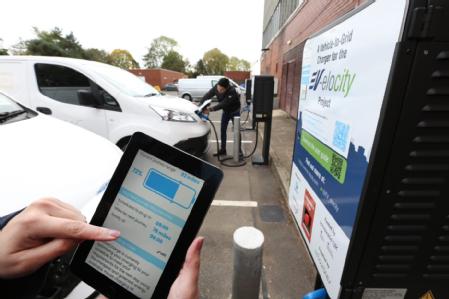 Dr Julie Waldron, Research Fellow at the University of Nottingham, who is studying user behaviour, said: “Company cars and vans tend to earn money while out on the road, but electric vehicles could also be a source of income when they’re parked up. We know cost is a major factor deterring mass adoption of electric vehicles, but if V2G charging helps EV owners get a quick return on their investment, it could make purchasing electric vehicles a much more attractive option to a bigger customer base.”

· With the biggest electric fleet of any local authority in England, Leeds City Council has installed 5 V2G chargers under the EV-elocity project

· The University of Nottingham, another user of EV fleets, has installed two V2G units on its main campus

· Nottingham City Council, which also has a large electric vehicle fleet and a very ambitious target to become carbon neutral by 2028, is planning to install 40 units

Using data from V2G chargers and trackers in EV cars, and user behaviour analysis on the study, researchers are examining mobility patterns, EV charging requirements/trends, battery degradation, and electricity generation, storage and use.

“Understanding the patterns of vehicle usage will allow us to evaluate the best charging infrastructure required for EVs, for example the locations and type of charging points and plugs (which currently vary between car brands), compatibility with V2G, charging periods and energy demand, etc. This will enable us to rethink the system and inform the users’ decision-making process in order to maximise benefits for consumers and the planet.” Dr Waldron adds.

https://warwick.ac.uk/services/communications/medialibrary/images/november_2021/l1010286.jpg
Caption: A V2G charger on campus at the University of Warwick
Credit: EV-elocity

Researchers from the Transport, Mobility and Cities and the Building, Energy and Environment research groups are studying user behaviour in EV-elocity demonstrator trials. They have also developed a V2G case study that will be tested at the University Park Campus. The project fits in well with the University’s commitment to use innovative technologies to make its campuses smarter and more sustainable to enhance the user experience and reduce its carbon footprint. The campus’ infrastructures and services operate very much like those of a small town, so it is a great testbed for technology implementation prior to installation in real cities.

University Park campus uses different types of fleets, in terms of users, routines, parking location and dwell times. This behaviour data was analysed and correlated with other parameters such as routes and movement patterns, renewable energy availability on site, grid cost and grid energy carbon emissions to identify the most promising charging pattern and infrastructure to deliver financial and carbon savings, improve battery life and maximise local renewable energy consumption.

Under EV-elocity, two V2G units have been installed on University Park campus and will be collecting data until March 2022 to identify whether proposed usage delivers against the targets set.

Leeds has one of the largest public sector fleets of electric vehicles in the country and ambitions plans to continue its transition to a zero emission fleet as part of meeting a city-wide target to become the first net zero major city. This project is part of delivering on this ambition. There have been six V2G units installed in Leeds, one at our Parks & Countryside department headquarters at Farnley Hall and five at our Knowsthorpe Gate depot site. The chargers will be used by a range of different services vehicles across this sites with the Nissan Env-200’s utilised for the project having been fitted with telematics to capture data to feed into the projects assessment of the technology.

WMG is a world leading research and education group, transforming organisations and driving innovation through a unique combination of collaborative research and development, and pioneering education programmes.

As an international role model for successful partnerships between academia and the private and public sectors, WMG develops advancements nationally and globally, in applied science, technology and engineering, to deliver real impact to economic growth, society and the environment.

WMG’s education programmes focus on lifelong learning of the brightest talent, from the WMG Academies for Young Engineers, degree apprenticeships, undergraduate and postgraduate, through to professional programmes.

An academic department of the University of Warwick, and a centre for the HVM Catapult, WMG was founded by the late Professor Lord Kumar Bhattacharyya in 1980 to help reinvigorate UK manufacturing and improve competitiveness through innovation and skills development.

One vehicle-to-grid charger was installed at the headquarters of Worcestershire County Council, County Hall, in their underground staff car park. The test vehicle a 2016 Nissan Leaf is used by the council as a pool car for staff to make visits in the local area.

Two vehicle-to-grid chargers were installed at the mezzanine car park of the West Midlands Police Head Quarters. These units will be used to charge (and discharge) two Nissan Leafs (2016) that are part of the non-emergency response fleet based at the site in central Birmingham. These vehicles are used as pool cars by staff to attend non-urgent appointments and enquiries in the city and the surrounding area.

The Project EV-elocity is part of the Vehicle-to-Grid (V2G) competition, funded by the Department for Business Energy and Industrial Strategy (BEIS) and the Office for Zero Emission Vehicles (OZEV), in partnership with Innovate UK, part of UK Research and Innovation.

The 20 V2G projects (8 feasibility studies, 4 collaborative research and development projects, and 8 real-world V2G trial projects) receive funding of £30m to develop the business proposition and the core technology to support V2G deployment in the UK, including its demonstration with large scale trials.

The 20 projects involve more than 50 industrial partners and research organisations from both the Energy and Automotive sectors, making it the largest and most diverse V2G activity in the world, trialling more than 500 vehicles and V2G charger units across UK.

The V2G projects represent a significant step towards the transition to a low carbon transportation and a smart energy system. Allowing EVs to return energy to the Power Grid when parked and plugged-in will increase Grid resilience, allow for better exploitation of renewable sources and lower the cost of ownership for EV owners, leading to new business opportunities and clear advantages for EV users and energy consumers.