· Osmium is a rare precious metal that could be used to treat cancer with fewer side effects when compared to Platinum, currently used in nearly half of chemotherapies

· Using a 185 metre synchrotron beamline, the researchers found that Osmium reacts in the cytoplasm rather than the nucleus of a human lung cancer cell, which may reduce side effects

Using a 185 metre beamline at the Diamond synchrotron, researchers could see how Osmium, a rare precious metal that could be used for cancer treatments, reacts in a single human lung cancer cell. This is a major step forward in discovering new anti-cancer drugs for researchers at the University of Warwick. 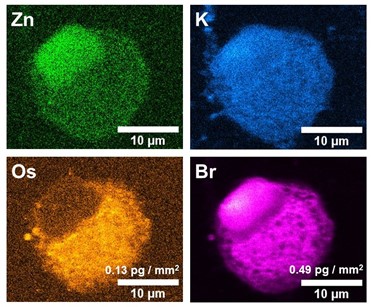 platinum, which when once inside the cancer cell reacts in the nucleus, which may lead to undesirable side effects of the treatment. However, Osmium is a rare metal that has not been researched widely, and might be used as a new cancer treatme

nt with fewer side effects.

In the paper, ‘Tracking Reactions of Asymmetric Organo-Osmium Transfer Hydrogenation Catalysts in Cancer Cells’, published in the journal Angewandte Chemie, researchers from the University of Warwick have, for the first time, used the new 185 m beamline to track Osmium in a single cancer cell at a scale of 100 nanometers.

They used two techniques to track potential treatments in cancer cells, the first, ICP-MS, which stands for Inductively Coupled Plasma-Mass Spectrometry, can quantify a wide range of natural and drug elements in millions of cells. However, to investigate a single cancer cell, researchers used synchrotron X-ray Fluorescence (XRF) imaging.

Using a hard-x-ray nanoprobe beamline, researchers from the University of Warwick observed how Osmium reacted in a single lung cancer cell. However, the reactivity of Osmium is determined by its coating (its ligands), so they monitored the ligands too in the same XRF experiment by labelling them with Bromine.

Once the Osmium was in the cell researchers observed that Osmium stays in the cytoplasm, whereas the ligands entered the nucleus, potentially indicative of dual attack on the cancer cell. 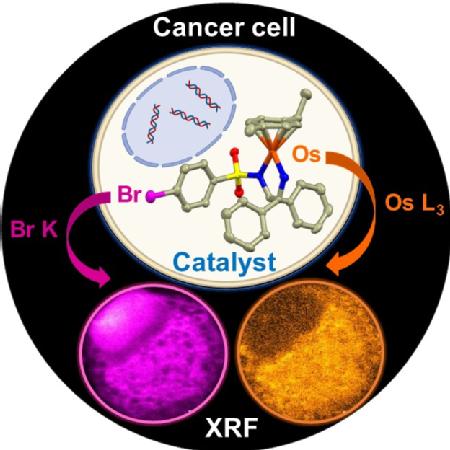 Professor Peter Sadler, from the Department of Chemistry at the University of Warwick comments:
“With one in two people getting cancer in their lifetime, the need to find new drugs has never been more urgent. Part of drug discovery is seeing exactly how they react and work in cells.”

“Osmium is a rare precious metal, however, since it can act as a catalyst, a very little amount is needed for reactions in the cancer cell, therefore it could be a sustainable treatment going forward. We wanted to see how exactly it worked in a single cancer cell, which involved a variety of novel techniques, including taking water molecules out of the cell and rapidly flash-freezing it. Whereas usually cells are chemically altered to see the reactions, in our method they are close to their natural state, making our results more authentic.”

Dr Elizabeth Bolitho, from the Department of Chemistry and Diamond adds:
“We worked 24 hours a day, 5 days a week to collect these exciting data, allowing us to see inside cancer cells to a nanoscale resolution. This has provided crucial insights into potential cellular targets of such Osmium catalysts.

“Not only were we able to track the Osmium in a lung cancer cell, but more widely in breast cancer, ovarian and prostate cancer cells, for example, which provides hope that in the future Osmium could be used to treat a range of different cancers.”

Professor Sadler added: “Our team hopes to progress their discoveries through pre-clinical development towards new Osmium drugs for cancer treatment, although this typically takes several years. If we succeed, then the days and sleepless nights spent collecting XRF data at the Diamond synchrotron will certainly have been worthwhile.”

Paul Quinn, Imaging group leader at Diamond Light Source added:
“The collaboration between Warwick and the I14 beamline is very exciting. Our research has exploited the advanced nano-imaging methods we’ve developed and built at Diamond to neatly image the location of these drugs within cancer cells and gain significant insights into how they interact.”

https://warwick.ac.uk/services/communications/medialibrary/images/february_2021/cancer_cell.jpg
Caption: X-ray fluorescence images taken at the I14 beamline at Diamond Light Source, the green is Zinc, Blue is Potassium, Orange is Osmium and Pink is Bromine
Credit: University of Warwick

https://warwick.ac.uk/services/communications/medialibrary/images/february_2021/cancer_cell_2.jpg
Caption: Detection of an anticancer compound in a cancer cell, the pink is the Bromine and orange in Osmium
Credit: University of Warwick

Diamond Light Source provides industrial and academic user communities with access to state-of-the-art analytical tools to enable world-changing science. Shaped like a huge ring, it works like a giant microscope, accelerating electrons to near light speeds, to produce a light 10 billion times brighter than the Sun, which is then directed off into 33 laboratories known as ‘beamlines’. In addition to these, Diamond offers access to several integrated laboratories including the world-class Electron Bio-imaging Centre (eBIC) and the Electron Physical Science Imaging Centre (ePSIC). Diamond serves as an agent of change, addressing 21st century challenges such as disease, clean energy, food security and more. Since operations started, more than 14,000 researchers from both academia and industry have used Diamond to conduct experiments, with the support of approximately 700 world-class staff. More than 8,000 scientific articles have been published by our users and scientists.

Funded by the UK Government through the Science and Technology Facilities Council (STFC), and by the Wellcome Trust, Diamond is one of the most advanced scientific facilities in the world, and its pioneering capabilities are helping to keep the UK at the forefront of scientific research.