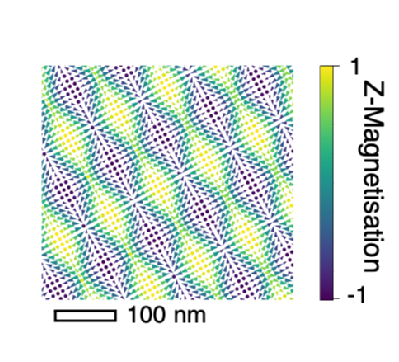 Physicists on the hunt for a rarely seen magnetic spin texture have discovered another object that bears its hallmarks, hidden in the structure of ultra-thin magnetic films, that they have called an incommensurate spin crystal.

A team from the University of Warwick reports the findings in the journal Nature Communications, which could offer new possibilities for technologies such as computer memory and storage.

The researchers initially set out to find a Skyrmion, a whirling magnetic spin texture theorised to exist in particular magnetic materials and that are of great interest to physicists due to their unique properties and potential for a new generation of energy efficient data storage. To find them, scientists look for abnormal behaviour of the Hall effect; this causes electrons moving through a conducting material to behave differently, measured as resistivity.

To induce this effect, the team created samples by combining an extremely thin film of a ferroelectric material, lead titanate, with another thin film of a ferromagnet, strontium ruthanate. These layers are atomically flat, a mere five to six unit cells (3 nanometres) thick.

The ferroelectric layer induces an electric field that warps the atomic structure of the ferromagnet, breaking its symmetry. Using atomical precision electron microscopy, they measured this symmetry breaking, and were also able to separately measure the electrical resistivity of the material and confirmed the presence of features akin to the Topological Hall effect, as would be expected for a Skyrmion. 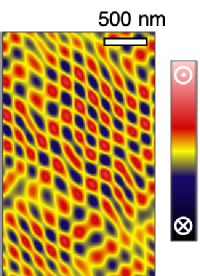 Then the researchers used Magnetic Force Microscopy to examine the topology of the material’s atomic structure, which formed a lattice based on rectangles – not hexagons, as they would expect. Within this lattice are magnetic domains where Skyrmions would be found as individual, isolated particles. Instead, these domains formed more like beads on a string or necklace, with beads that never quite form a perfect circle.

Lead author Sam Seddon, a PhD student in the University of Warwick Department of Physics, said: “Once you make careful examination of the images, you realise, actually, this doesn’t present like a Skyrmion at all.

“A Skyrmion causes its own complicated Hall effect and when similar-looking effects are observed it is often treated as a signature of the Skyrmion. We’ve found a very ordered domain structure, just as a Skyrmion lattice would form, however they are simply chiral and not topologically protected. What this shows with real-space imaging evidence is that you don’t need a topological domain to cause a Hall effect of this kind.“

Ferroelectric and ferromagnetic materials are important for technologies such as computer memory and storage. For example, materials very similar to lead titanate are often used for the computer memory in the electronic systems in cars, due to their robustness and ability to operate at extreme temperatures.

Co-author Professor Marin Alexe from the University of Warwick said: “There is interest in these types of interfaces between ferroelectric and ferromagnet materials, such as for new types of computer memory. Because ferroelectric polarisation can be switched permanently, this modifies a quantum effect in a ferromagnet and that might give us direction for materials for the next quantum computers. These will need stable materials which work at extreme temperatures, are low-power consumption, and can store information for a long time, so all the ingredients are here.

“Topology is the translation of certain mathematical concepts into real life and is now at the core of new discoveries in physics. At the University of Warwick we have an extraordinary and advanced infrastructure which allows us to tackle a problem from theoretical point of view, to looking at atomic structure, right up to looking into functional properties at extreme temperatures and fields, especially magnetic fields. We are able to offer foundations for engineers to develop new technologies from.”

The measured domain pattern of the 'incommensurate spin crystal' phase:

The simulated domain pattern of the 'incommensurate spin crystal' phase:

Download a photograph of Professor Marin Alexe of the University of Warwick Department of Physics:

Download a photograph of Lead author Sam Seddon of the University of Warwick Department of Physics: