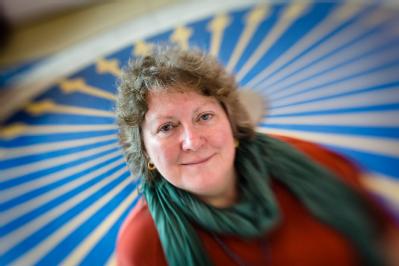 Professor Sandra Chapman from the University of Warwick Department of Physics has been selected to give the 2020 Ed Lorenz Lecture during the American Geophysical Union (AGU) Fall meeting taking place between 1-17 December. AGU is an international non-profit, scientific organization working across the full range of earth and space sciences, representing nearly 60,000 members in 137 countries.

Professor Sandra Chapman, who leads the Centre for Fusion, Space and Astrophysics in the Department of Physics said: “It is a privilege to be chosen to deliver the Ed Lorenz lecture at the Fall Meeting of the American Geophysical Union.

“Ed Lorenz was a pioneer in the study of non-linear systems, where a small initial variation can lead to a big difference in outcome. Plasma - the fourth state of matter - is ubiquitous throughout the universe and is frequently non-linear in its behaviour. Prime examples are right on our doorstep here in our solar system, from solar flares erupting on the surface of the sun, to the turbulent solar wind, to its driving of space storms that produce the northern lights but can also damage satellites and systems at Earth such as those for power distribution and communications.

“Since the next solar cycle of activity is just getting started, it is particularly timely to be talking about how we have progressed from Lorenz’s original insights to the fundamental non-linear physics of the solar corona, solar wind, and earth’s magnetosphere and how we can quantify space weather risks.”

Professor Chapman works on problems in non-linear physics in solar system and laboratory plasmas and more widely. Her recent work has included constructing networks to parameterize the ground effects of the Northern Lights, using historical data to quantify the risk of extreme space weather events and the creation of a ‘sun clock’ to quantify their solar cycle dependence.

Solar system plasmas offer a rich laboratory for the fundamental physics of systems that are driven, dissipating and far from equilibrium. The sun, solar wind and Earth’s magnetosphere exhibit non-linear processes that are coupled across a broad range of space and timescales resulting in bursty energy and momentum transport.

Professor Chapman adds: “There is now a hot debate as to how we can use machine learning and Artificial Intelligence as tools for discovery. If we can synthesize human creativity and machine learning, there is significant potential for progress given the wealth of data that is becoming available.”