UK researchers will continue to gain new insights into vital high tech engineering materials and novel pharmaceuticals thanks to a new £2.7m contract to support a national research facility in the University of Warwick’s Centre for Magnetic Resonance.

The contract means that the UK 850 MHz Solid-State NMR (Nuclear Magnetic Resonance) Facility will be in operation for a further five years. 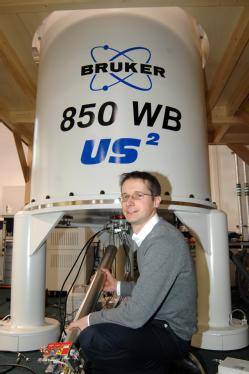 The NMR Facility, hosted at the University of Warwick and managed by a consortium of seven UK universities, allows researchers to gain a detailed understanding of the structure and motion of molecules which will help in the creation of new materials.

Since its launch in 2010 the NMR Facility has been used by researchers from 22 institutions and contributed to a diverse range of innovative research projects across many scientific disciplines, including:

The NMR Facility is currently used 24 hours a day 365 days a year and is aimed at solid-state NMR spectroscopists and their collaborators.

Commenting on the NMR Facility’s success Professor Steven Brown, from the University of Warwick’s Department of Physics, said:

“The NMR Facility is a flagship national success for shared equipment and multi-disciplinary research. Since its launch it has contributed to a broad range of ground-breaking research and we look forward to continue doing so in the years ahead.

“NMR spectroscopy is a vital analytical tool across science. It is a powerful technique that can provide detailed information on the three-dimensional structure and dynamics of molecules in solution and the solid state.”