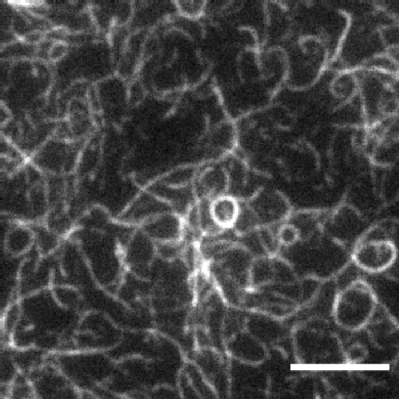 A protein that causes a cell’s skeleton to bend, allowing it to twist the cell into different shapes, could be key to how cells divide according to University of Warwick scientists.

By making the cytoskeleton bend inwards to a tight point at its centre, one cell divides into two – much like how you would make a balloon animal by twisting. The protein, named ‘curly’, has been observed bending the material that makes up the cytoskeleton for the first time.

Their results, from research supported by the European Research Council and Wellcome Trust, are published in the journal eLife and point to new ways to modify and engineer cells, as well as a better understanding of how they replicate – a process essential to all living organisms.

All living matter is made up of cells, which are surrounded by a fragile and flexible membrane much like a balloon. This is supported by a cytoskeleton composed of a material called actin that give structure and stability to cells. Filaments of actin are semi-flexible and normally straight and it has long been thought that they form structures by stacking together like matchsticks.

During cell division a cell will create a cytokinetic ring, a type of machinery comprised of actin and motor proteins called myosin, along the centre of the surrounding membrane. The myosins then constrict the actin filaments together and squeeze the cell down its middle until it divides – as if making the parts of a balloon animal, except from the inside.

Until now, it was thought that the actin filaments that comprise the cytokinetic ring break up as the cell is squeezed tighter. An interdisciplinary collaboration between Professor Mohan Balasubramanian, Dr Saravanan Palani (now at the Indian Institute of Science) and Dr Darius Köster at the University of Warwick was astonished to find that a segment of the protein Rng2, nicknamed ‘curly’, can naturally curve actin, with 10 micrometres of actin forming a ring less than a micrometre in diameter.

It could suggest that ‘curly’ plays a key role in allowing the cytokinetic ring to shrink tightly enough to divide a cell.

More than 20 years ago, Rng2 was discovered by one of the lead authors, Professor Mohan Balasubramanian, as an important protein in this process, but only now have researchers made the astonishing observation that it can bend actin filaments into actual rings. Rng2 is related to the highly conserved IQGAP family of proteins present from yeast to human, so the findings may be relevant to other cells as well, including human.

Lead author Dr Darius Köster of Warwick Medical School said: “What we show is if we have this protein on the membrane and we polymerise fresh actin filaments at the membrane, representing what is happening in the cytokinetic ring, the actin starts to bend. If you have it in a cell, it’s a curved surface so the actin would curve.

“As far as we know, there are no other proteins doing this kind of job with individual filaments. If you look inside cells, there are definitely curved actin structures, but it was thought that they were stacks of very short straight filaments packed together. This opens the perspective that it could be geometries and certain organelles that the actin is actually wound around.”

The researchers used what is known as a reconstitution approach, in which they examine a complex system by separating it into its constituent parts, then reassemble it to find out what role each individual element plays.

For this study, that was funded by the European Research Council and the Wellcome Trust, they made a lipid bilayer to represent the cell membrane and experimented with adding different proteins to it that are normally found at the interface with the cytokinetic ring during cell division. They then added actin filaments and myosin to represent the ring itself. It was when ‘curly’ was present that they observed the actin forming highly curved structures, behaviour not normally seen in these kinds of experiments.

It opens the possibility of using ‘curly’ as a tool to engineer different shapes of cells. Scientists could use it to modify the cytoskeleton and twist the cell into new shapes, in a manner similar to balloon modelling.

“This can help us to really understand how curved actin can deform membranes, or whether the cell uses this as a mechanism to control certain processes. There seem to be some proteins that like to twist and change the curvature of actin and if that’s happening then it’s very likely that there will be other proteins that take that as an information cue.”

Montage summarising the experiment and the paper: https://warwick.ac.uk/services/communications/medialibrary/images/july_2021/curly_sketch_twitter2.jpg

The European Research Council, set up by the EU in 2007, is the premiere European funding organisation for excellent frontier research. Every year, it selects and funds the very best, creative researchers of any nationality and age, to run projects based in Europe. The ERC offers four core grant schemes: Starting, Consolidator, Advanced and Synergy Grants. With its additional Proof of Concept grant scheme, the ERC helps grantees to bridge the gap between grantees’ pioneering research and early phases of its commercialisation. https://erc.europa.eu/