A Single Crystal CVD Diamond X-ray Beam Diagnostic with Embedded Graphitic Wire Electrodes, Synchrotron Radiation Instrumentation Conference (SRI 2018)
Abstract. A single crystal CVD diamond detector with graphitic wire electrodes running beneath the diamond surface has been fabricated. This detector design is novel in that there is no surface metallisation present within the active region, and so the detector is a uniquely transmissive X-ray beam diagnostic instrument. This detector is designed to simultaneously measure the position, profile, and flux of an incident beam. It has applications in beam position and profile monitoring, and active beam feedback and stabilisation. To achieve this, a short-pulse laser, focused to micron-sizes using adaptive optics, can be used to graphitise arbitrary wire paths within bulk diamond. Presented in this paper is a transmissive X-ray pixel detector design with a 50-micrometre pixel pitch created using this technique. This pixel detector is produced by fabricating two separate arrays of parallel wires running under the surface of a diamond plate. The two arrays run perpendicular to each other, and parallel to the diamond surface. They are separated within the material by a depth of 100 microns. The parallel wires within each array are separated by 50-microns, and this is what determines the pixel pitch. Each of the crossing points between two wires from each array acts as a pixel. The signal from each pixel may be read out by measuring the signal current from each wire in one array whilst applying a bias voltage alternately to each wire in the other, perpendicular array. Alternatively, it is proposed to modulate the bias applied to each wire at a different frequency, from which the 2-dimensional beam profile may also be measured using a lock-in technique. This paper will provide an overview of the fabrication techniques for this first prototype detector, and provide a discussion of signal readout methods that will be used. An outline of the planned experimental tests is given.

The Use of Single-Crystal CVD Diamond X-Ray Beam Diagnostics for Synchrotron Beamline Commissioning and Operation at Diamond Light Source Ltd, IEEE Nuclear Science Symposium (NSS 2016)
Abstract. We report on the use of single-crystal chemical vapour deposition (scCVD) diamond X-ray beam diagnostics at Diamond Light Source Ltd (DLS) for beamline commissioning and day-to-day beamline operation. It is demonstrated that such detectors can offer synchrotron beamlines a measurement of the X-ray beam position with resolutions of a few 10nm at kHz bandwidths. It is straightforward to extract extremely valuable spectral information of both beam motion and intensity, aiding beamlines in determining the source of vibrations or other beam instabilities. In this paper we discuss the motivation behind the use of single-crystal diamond detectors for monitoring monochromatic X-ray beams, and advantages over other diagnostic techniques are discussed. In order to absolutely quantify the performance of the diamond detectors in use at DLS an experiment has been conducted with three diamond X-ray beam position monitors installed on a beamline, longitudinally separated along the beam path by ~10 millimeters and intercepting the same incident X-ray beam. Measurements from each of the three diamond detectors were synchronously acquired at kHz bandwidths. Other, independent measurements were employed to corroborate the measurements obtained from the three X-ray beam position monitors. The uncorrelated position measurement noise recorded by the synchronous measurements and is shown to be less than 1% of beam size at this bandwidth. Longer integration times resulted in correspondingly less measurement noise.

An experimental evaluation of monochromatic X-ray beam position monitors at Diamond Light Source, 12th International Conference on Synchrotron Radiation Instrumentation (SRI 2015)
Abstract. Maintaining the stability of the X-ray beam relative to the sample point is of paramount importance for beamlines and users wanting to perform cutting-edge experiments. The ability to detect, and subsequently compensate for, variations in X-ray beam position with effective diagnostics has multiple benefits: a reduction in commissioning and start-up time, less ‘downtime’, and an improvement in the quality of acquired data. At Diamond Light Source a methodical evaluation of a selection of monochromatic X-ray Beam Position Monitors (XBPMs), using a range of position detection techniques, and from a range of suppliers, was carried out. The results of these experiments are presented, showing the measured RMS noise on the position measurement of each device for a given flux, energy, beam size, and bandwidth. A discussion of the benefits and drawbacks of each of the various devices and techniques is also included.

Using principal component analysis to find correlations and patterns at Diamond Light Source, Proceedings of International Particle Accelerator Conference (IPAC 2014)
Abstract. Principal component analysis is a powerful data analysis tool, capable of reducing large complex data sets containing many variables. Examination of the principal components set allows the user to spot underlying trends and patterns that might otherwise be masked in a very large volume of data, or hidden in noise. Diamond Light Source archives many gigabytes of machine data every day, far more than any one human could effectively search through for correlations. Presented in this paper are some of the results from running principal component analysis on years of archived data in order to find underlying correlations that may otherwise have gone unnoticed. The advantages and limitations of the technique are discussed.
Measurements of small vertical beamsize using a coded aperture at Diamond Light Source, Proceedings of the International Beam Instrumentation Conference (IBIC 2014)
Abstract. Diamond Light Source produces a low emittance 3 GeV electron beam which is now regularly operated at 8 pm rad vertical emittance. This corresponds to a vertical beamsize of just 13 μm in the dipole, which is at a high vertical beta location and routinely used for observing the synchrotron radiation using a pinhole camera. Deconvolution of the images from the pinhole camera to maximise resolution is limited by uncertainty regarding the precise shape of the pinhole, resulting in uncertainty on its computed point spread function. Recently a coded aperture has been installed which offers the potential to improve upon the traditional pinhole measurement by offering both higher resolution and increased flux seen through a larger total aperture, however, at the cost of significantly more complex analysis of the recorded images. A comparison of results obtained using the coded aperture and those achieved using the conventional pinhole is presented.

Operation of Diamond Light Source XBPMs with zero bias, Proceedings of the International Beam Instrumentation Conference (IBIC 2013)
Abstract. Tungsten blade X-ray Beam Position Monitors (XBPMs) have been used at Diamond Light Source since 2007, however a long-standing problem with these devices has been the growth of leakage current through the ceramic insulation within the XBPMs over time, often becoming greater than 10 % of the signal current after a few years of operation. The growth of these leakage currents has been found to be exacerbated by the application of a negative bias (-70 V) to the tungsten blades, a bias suggested for optimum position sensitivity. This bias is applied in order to accelerate free electrons away from the surface of the blades and to prevent cross-talk, however, we have found that the operation of the XBPMs without bias has negligible impact on our measurements. Removal of the bias has been found to prevent the growth of leakage currents over time, and can also significantly reduce the cost of our signal acquisition by removing the need for a low-current amplifier with a bias supply

Using DCM pitch modulation and feedback to improve long term X-ray beam stability, 11th International Conference on Synchrotron Radiation Instrumentation (SRI 2012)
Abstract. In this paper we demonstrate significant improvements to the stability of the monochromatic X-ray beam intensity on several beamlines at Diamond, using a modulation of the pitch axis of the DCM with a piezoelectric actuator. The modulation is detected on an intensity diagnostic (e.g. an ion chamber) using a software lock-in technique. The detected amplitude and phase are used in a feedback to keep the DCM at the peak of the rocking curve, or any arbitrary position ‘off-peak’ which might be desired to detune the DCM and reject unwanted harmonics. A major advantage of this software based system is the great flexibility offered, using standard, readily available instrumentation. Measurements of the short and longterm performance of the feedback on several beamlines are presented, and the limitations of such a feedback are discussed.
Real-time calculation of scale factors of X-ray beam position monitors during user operation, Proceedings of the International Beam Instrumentation Conference (IBIC 2012)
Abstract. Photoemission based X-ray Beam Position Monitors (XBPMs) are widely used at 3rd generation light sources to both monitor and stabilise the photon beam to sub-micron precision. Traditionally, finding the geometric scale factors requires either systematic stepper motor movements of the XBPM or well controlled electron beam displacements to measure the response of the XBPM. For each Insertion Device gap it is required to repeat this in order to build up a complete set of scale factors covering all possible operating conditions. Elliptically Polarising Undulators further complicate matters by having multiple operating modes which would require multi dimensional lookup tables. Presented in this paper is a method for retrieving the geometric scale factors of an XBPM in real time by making use of the intrinsic small random movements of the electron beam and finding the correlation in synchronous measurements from
Electron BPMs and XBPMs at kHz sample rates.

An aperture-backscatter X-ray beam position monitor at Diamond, 10th European Workshop on Beam Diagnostics and Instrumentation for Particle Accelerators (DIPAC 2011)
Abstract. This paper presents the design andfi rst results of a new XBPM developed at Diamond that images the pho-ton backscatter from a Front End absorber to measure the beam centre of mass. This is of particular interest for monitoring the emission fro m elliptically polarising undu-lators where the profi le of the beam varies strongly with change of beam polarisation. Traditional four-blade Front End XBPMs struggle to resolve a beam centre of mass for EPUs because of this. We have developed an XBPM that observes the backscattered photons from a copper aperture through a pinhole. This solution is capable of operating with the full white beam, and has been designed tofi tinto the same physical space as the standard front end XBPMs in use at Diamond. This offers the potential to easily re-place traditional XBPMs where benefi cial and required. 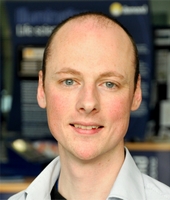