A whirlwind trip to the USA for the 131st annual MLA conference – held this year in Austin, Texas – in the course of which I was presented with the MLA Prize for a Scholarly Edition for my work as General Editor of John Nichols’s The Progresses and Public Processions of Queen Elizabeth I: A New Edition of the Early Modern Sources (Oxford University Press, 2014). Founded in the USA in 1883 to promote the study and teaching of modern languages and literatures, the MLA today has over 26,000 members in 100 countries and is one of the world’s largest academic associations. At the organisation’s annual conference – held each winter in a different North American city – members come together to share scholarly findings and pedagogical techniques, to discuss trends in the academy, and, via the MLA prizes, to recognise new publications of note in the field of modern languages and literatures.

My personal highlights from the rich 2016 conference programme – which featured more than 800 sessions and related events – included: a stimulating round-table discussion, moderated by MLA President Professor Roland Greene (Stanford), in which Professor Albert Ascoli (University of California, Berkeley), Professor Bruce Holsinger (University of Virginia), and others explored the conference theme, ‘Literature and its Publics: Past, Present, and Future’; a creative conversation/interview between novelist and critic Cólm Toibín and Professor Stephen Burt (Harvard), which culminated in a Q&A session with members of the audience; and, of course, the MLA awards ceremony itself, held on Saturday, 9th January, the final night of the conference.

Twenty-four books were recognised by the judges, and it was a great source of institutional pride to see Warwick so well-represented amongst the award-winning titles and authors. Not only is John Nichols’s The Progresses and Public Processions of Queen Elizabeth I: A New Edition of the Early Modern Sources the primary output of the CSR-based John Nichols Research Project, but all four General Editors – myself, Dr Faith Eales (formerly Associate Fellow in the CSR), Professor Elizabeth Clarke (English), and Dr Jayne Elisabeth Archer (formerly Associate Fellow in the CSR) – are, or were, based at Warwick, as, indeed, are/were many of the scholars who contributed to the five-volume set as section editors and translators. In addition, Professor Maureen Freely of Warwick’s English Department was honoured at the awards ceremony as the recipient, with Alexander Dawe, of the MLA’s Lois Roth Award for a Translation of a Literary Work for The Time Regulation Institute by Ahmet Hamdi Tanpinar (Penguin, 2014).

The prizes were formally presented by Professor Kwame Anthony Appiah, who, in his capacity as First Vice President of the MLA, lent the evening a suitably splendid sense of occasion. Each award winner was called to the stage to shake Professor Appiah’s hand and to receive a handsome, leather-bound certificate inscribed with the text of the judges’ award citation, which, in the case of John Nichols’s The Progresses and Public Processions of Queen Elizabeth I: A New Edition of the Early Modern Sources, reads:

‘In the eighteenth century, John Nichols set out to document the splendid ceremonies of the Elizabethan age.
With John Nichols’s The Progresses and Public Processions of Queen Elizabeth I: A New Edition of the Early Modern Sources, Elizabeth Goldring,
Faith Eales, Elizabeth Clarke, and Jayne Elisabeth Archer set themselves an even more daunting task – to reedit the sixteenth-century sources
along with Nichols’s own work. They have succeeded admirably, coordinating forty contributors to a consistently high standard of erudition,
precision, and transparency. The volumes feature everything the scholar could wish for and more, from an intelligent critical apparatus to more
than one hundred beautifully instructive illustrations. This edition allows us to view Elizabethan court culture with fresh eyes and will give impetus
to much new research. These volumes will be the standard reference for the sixteenth-century English court for many years to come.
No scholar of the Elizabethan age can “progress” without it.’

Although neither Elizabeth Clarke nor Jayne Elisabeth Archer was able to attend the ceremony, it was a great pleasure to be reunited for the evening with Faith Eales – as well as with our editor at Oxford University Press, Jacqueline Baker, who cheered us on from the audience. 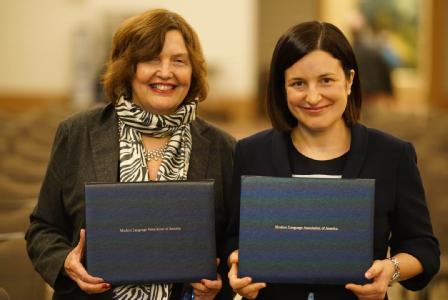 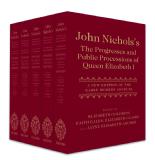 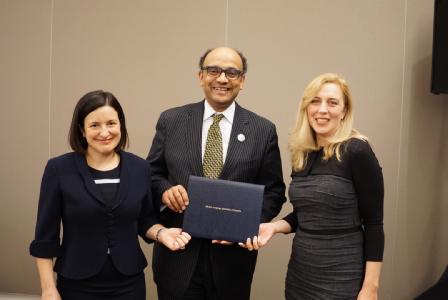