In the Autumn Term 2008, Andy Williams RSC\Warwick Fellow in Creativity, led a short project on creating and directing a Shakespeare-inspired image.

Working initially with Carol Rutter (Director of the Capital Centre) to discuss short passages of text from A Midsummer Night's Dream and look at some film footage for inspiration, the project explored the creation of an image through discussion and practical implementation — a process of conversion from text into image that simulates the way a theatre director puts a production onto the stage. The project wasn't about technique and achieving a highly technically accomplished finished piece; it was about creative thinking and experiencing the processes involved in making an image. The project will culminate with an exhibition in the Capital Centre.

5 weeks in the autumn term starting on Wednesday 22 October, 5-7pm in the Studio at the Capital Centre, with 5 x 2-hour sessions, culminating in an exhibition in the last week of term.

15 students from across the University collaborated on this project. No experience of making images was required. The project required creative energy and confidence to be creatively open with other participants. 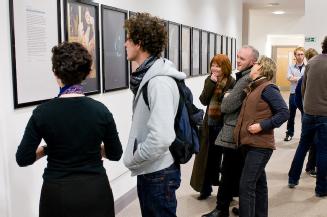