Many thanks for all your submissions. After long deliberations we are pleased to reveal our winners.

In first place Alanah Mitchell with her image 'Multilingualism' 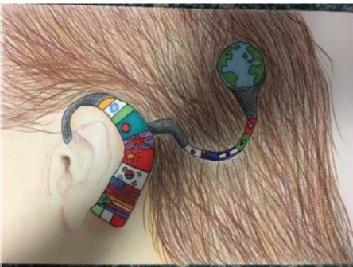 Alanah wrote, 'A cochlear implant works through directly stimulating the auditory nerve circumventing any damaged part of the ear and thereby allowing the wearer to detect sound.
Designing this piece of artwork myself, I used the image of a cochlear implant as a visual metaphor for multilingualism. The cochlear implant decorated with flags from across the world and the transmitter illustrated as a globe suggests that having a greater knowledge of other
languages and cultures can help circumvent potential stereotypes or stigmas people hold of different places, allowing the wearer to transcend these negative ideologies and become a ‘multilingual’. I also hoped to acknowledge the multilingualism found in signed languages and in
the deaf community through creating a piece that was heavily influenced by the medical device used by many who have profound hearing loss.' 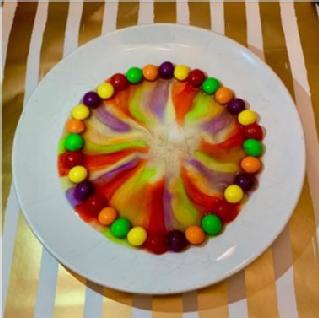 Tom, wrote: 'The image shows colours from Skittles seeping together and mixing on a blank canvas (plate). Each colour represents a different language and culture. The image shows that being multilingual gives one a greater understanding and acceptance for other languages and cultures. The colours seep and mix together representing how there are not distinct borders between languages, particularly for multilinguals who can switch seamlessly between languages in the midst of interactions.'

And in third place Michelle Leeming and her photo 'Catalyst' 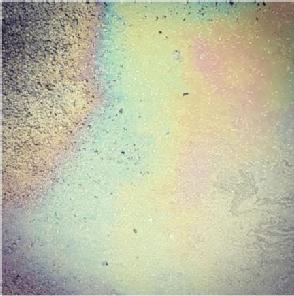 Michelle wrote, 'Deep within the black heart of the oil lies a rainbow of beauty, we just need to add a catalyst to see the change. Thus in parts of the world that are grey with the dirt of war, famine, disease, we delve beneath, we add a catalyst of understanding, and see that the grey it is made up of beautiful, multilinguistic and cultural practices that enrich our world and our lives.'