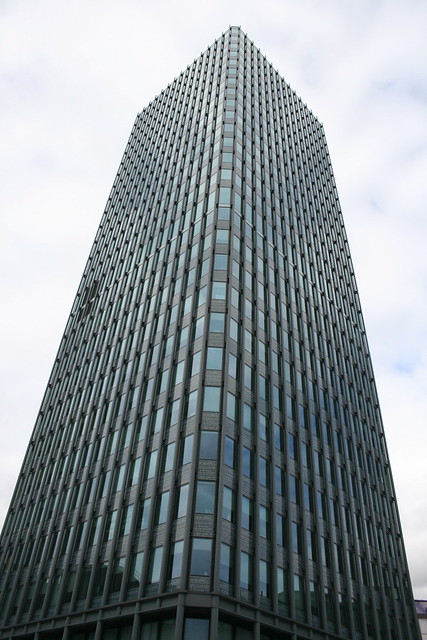 Tour Zamansky, the central tower of Jussieu Campus at UPMC

An Erasmus year abroad appealed to me as it is the best of both worlds for my academic interests. I wanted to study French and Mathematics to a higher level at university and a Mathematics course with a year abroad in France was the perfect solution. This way I could immerse myself into French culture without sacrificing any Mathematics studies. To prepare for my year abroad, I took French language modules in my first and second year at Warwick.

There was a lot to take into consideration before I could start enjoying my year abroad. I spent a month researching accommodation in Paris: avoiding scams, scouting for suitable areas and upon arrival, applying for government financial aid. Unfortunately, I could not get French university accommodation (CROUS) so I spent a couple of days prior to my temporary expatriation visiting apartments that I had organised viewings for online. This was my first experience of French administration and of speaking French to obtain something of such significance. Not without complication, I finally found accommodation for the year and sorted out home insurance. The ordeal of securing accommodation had certainly boosted my confidence and I was equipped for the independence of moving to Paris and embarking on my year abroad. Opening up a bank account, setting up a mobile phone plan and acquiring a transport pass are all achievements I am very proud of as I had to solve many minor setbacks with my French communication skills. The French government provide an accommodation grant for students, for which the application process requires a lot of paperwork. The French administration system is infamous for being very slow, dissatisfying and hard to contact by means other than snail mail, which taught me to have tremendous patience. It took 10 months to receive the accommodation grant after many sent letters and telephone conversations. All correspondance, I am also proud to say, was in French. 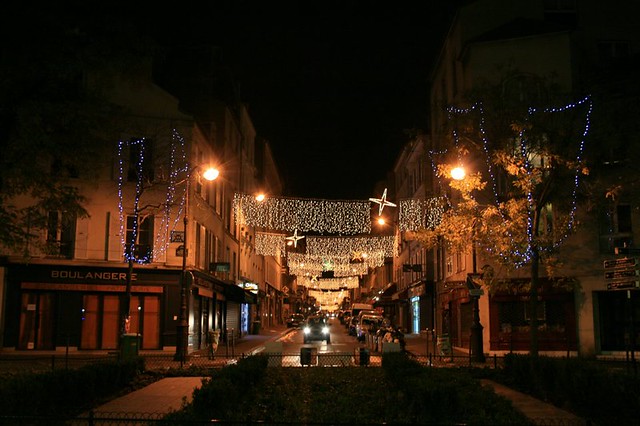 I lived in the 17th district of Paris, in Batignolles, the same haunting grounds as impressionist artists: Van Gogh, Claude Monet and Edouard Manet who regularly met here with other great French names such as Edgar Degas, Pierre-Auguste Renoir, Emile Zola and Paul Cézanne. I lived on this street, rue des Batignolles.

My first day at university in Paris gave me a great taste to what my French university life would generally be like. The day commenced at 9am with enrolment: a lot of administration, queuing and waiting. I tried to take the same amount of ECTS (European Credits Transfer System) for modules as I would CATs at Warwick. This resulted in taking 4 modules in the first semester (very different to the tens of modules I take in the terms at Warwick!). My first lecture was at 6pm until 8pm that very day. There were repeat lectures for the same module and many seminar classes for each module. Therefore, I could choose certain lectures and seminars to suit me, ultimately making me organise my own timetable. During the second semester I used this to my advantage keeping my Wednesdays free as I started a job with the company, Babylangues Paris.

Lectures would last for 2 hours which took me quite a while to become accustomed to after 2 years of 50-minute lectures in the UK. Seminars in the first semester for third year modules were 3 hours long with a break that lasted 15 minutes. For the second semester, third year module seminars were 4 hours long and again with the 15-minute break. With some days lasting from 8:30am until 10:00pm, I cannot describe how exhausted I was by the end of each week. Throughout my period of study, I was constantly examined with contrôle continus (similar to Warwick's weekly assessments), partiels (mid-semester exams) and final exams. After two months, I got into the swing of things; my optimum concentration time lasted longer during lectures. After bouts of defeat, I'd made some French friends to help me decode French mathematical abbreviations and penmanship that I just couldn't guess. Some seminar tutors made participation compulsory so the first time I was called to the board to answer an exercise, I was extremely afraid and nervous. I couldn't play the Erasmus card and receive any sympathy when I accepted the challenge of proving a theorem in a foreign language to a room full of judging strangers. By the third time this happened, my confidence in my language skills and mathematical ability had greatly improved and I was soon participating willingly. I had also enrolled to do French language lessons where I made some more Erasmus friends and consolidated my French language learning.

I would say that exams went quite well in some modules as I did not see the language as a particular problem. However, there were times of frustration due to lack of communication from the university which resulted in missed tests and lost exam results.

UPMC is a university of science and mathematics so there were a lot of facilities for mathematicians, including an underground Mathematics library. The long hours have made me greatly appreciative of my studies at Warwick and my Parisian university experience has allowed me to improve upon my independent study which I believe will truly benefit me for my final year at Warwick.

The Atrium at Jussieu Campus, UPMC

Nearly all Parisian universities, including UPMC, do not have student unions nor many societies. However, there was a very welcoming Internationals Society at UPMC who gave us a tour of the labyrinth-like campus and held weekly pub socials on Thursday evenings. Social networks such as Facebook and Twitter distributed advice from other year abroaders in Paris and information about what events were occurring. A society named Echange Internationaux A Paris (EIAP) organise some great nights out. Parisian clubs, in association with EIAP, have some free events especially for Erasmus students which were great to meet students who were having a similar experience to myself. EIAP also organise trips around France for International students in Paris. I went on trips with them to Normandy in the north-west and Strasbourg in the north-east, both of which were highly entertaining and enriching. With this appetite for exploring France, I travelled to Bordeaux in the south-west with some friends towards the end of my Erasmus year. 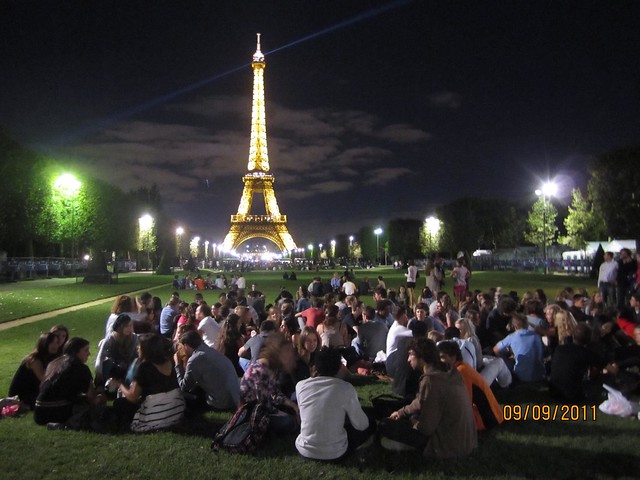 A weekly picnic on the Champs de Mars organised by EIAP.

I have made some wonderful friends from all over the world, from French and Finnish to American and South African. Not only have I learned about the French culture, but I have gained a lot of knowledge about cultures from around the world as we each shared something about where we came from. I was quite sad about missing out on the Queen's Diamond Jubilee Events in the UK so I organised a Great British Picnic to share the British culture amongst all my Parisian friends who enjoyed games such as "Pin the Crown on the Queen" and "Pass the Royal Mail". I think that we each felt equally vulnerable for being in a foreign country so our friendship was strengthened by the need to protect one another. I can honestly say that I have made some friends for life.

With Wednesdays free due to timetabling in my second semester, I decided to work for Babylangues Paris as a child carer and English instructor as it was a goal of mine to teach English abroad. I only worked for an average of 3 hours a week for 5 months so my studies were unaffected. Working closely with a French family outside of Paris allowed me to explore more of the Île-de-France and gain an intimate insight into French family life.

I wanted to take full advantage of living in such a vibrant city so I endeavoured to speak and listen to the country's native language spoken by true Parisians as much as I possibly could. I bought fruit and vegetables from the local markets, read the free newspapers on the métro, didn't hesitate to ask when I needed help and attended the many events that the city had to offer: Nuit Blanche, Armistice Day, Victory in Europe Day, Fête de la Musique and the Presidential Election speeches to name but a few. 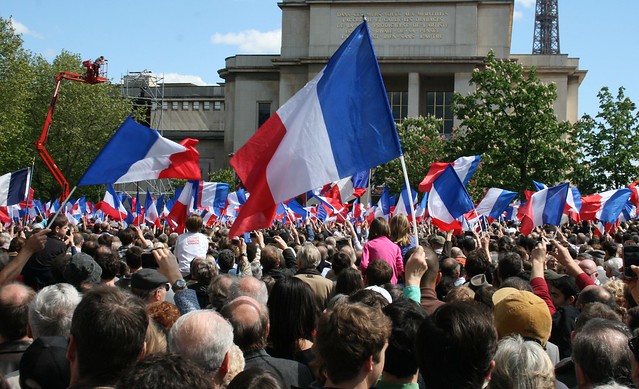 I used my free time to become a tourist. I explored the different neighbourhoods of Paris, visited museums and exhibitions, tried delectable new cuisine and discovered the real Paris. I wanted to see the city beyond the one that only tourists get to see as they only have a short amount of time in the City of Light. This made me discover a lot about the city and its people. I enjoyed observing the daily routine of a city so full of life, so similar yet so different from my hometown, London. There are far too many little anecdotes for me to write here and sights that I saw where written words would not do them justice. 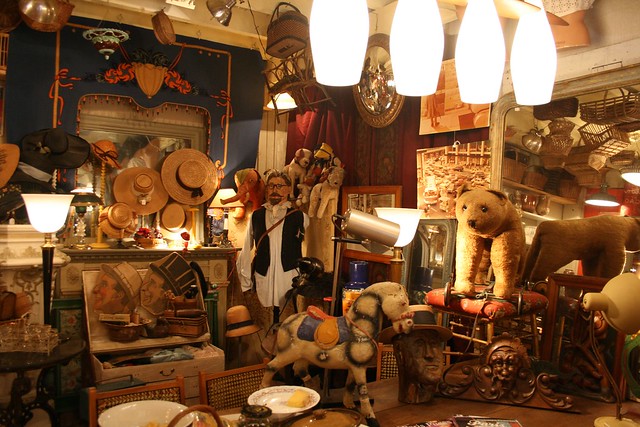 I enjoyed being a Parisienne if only for a few months. Before I knew it, I could direct lost French people to the nearest post office or town hall in my area effortlessly; use untranslatable French phrases in certain situations; determine the difference between the different baguettes available in the boulangerie; not have to fiddle with little métro tickets by using the ticket barriers that were especially for Navigo passes and be delayed by a protest march... or two. 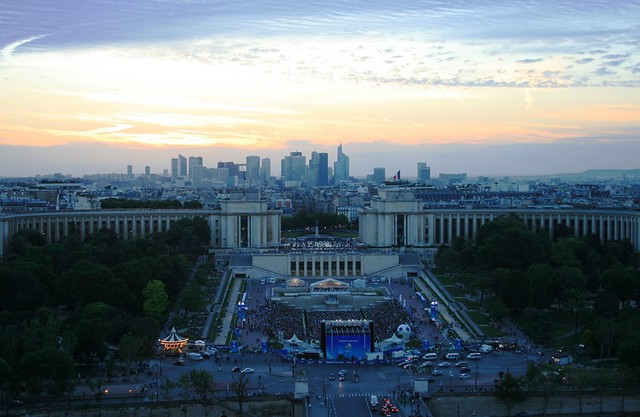 I climbed the stairs of the Eiffel Tower to watch the sunset. In this photograph, the Jardins du Trocadéro is filled with spectators for a Euro 2012 match (whom we could hear from the 2nd level of the tower). 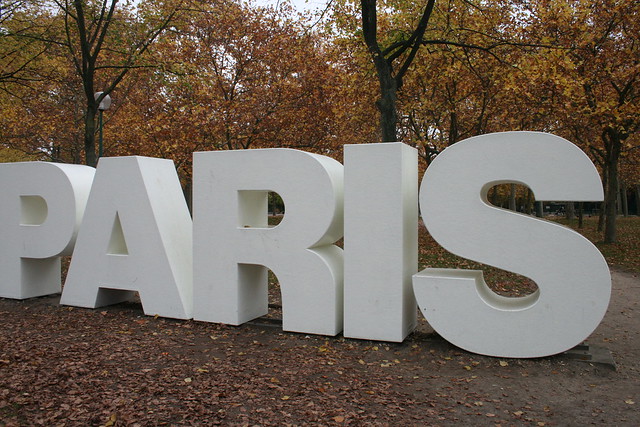 Spending a year away was extremely challenging for me due to important personal events which would have been easier if I had not been on a year abroad. I made sure to keep in contact with my family and friends to overcome these difficulties. Nevertheless, seeing the great personal development and independence I have achieved from my Erasmus year has been entirely rewarding. I may have missed out on graduating with the majority of my friends at Warwick, but I always knew that I would have to make sacrifices. I feel that I am a more organised, confident and independent individual. Having a year to think about the future without the stress of final exams and experiencing life outside of the UK has made my future career choice clearer. I also feel rejuvenated towards studies and cannot wait to return to Warwick and complete my final year.

My third year abroad has been a truly unforgettable and invaluable experience. I would like to thank all those at the University of Warwick and UPMC who made it possible, including all the people I met and the friends I made who enriched my experience. Merci beaucoup.