The University is deeply saddened by the news of the death of Dr Jack Cohen on 6 May 2019 at the age of 85. He was a joint Consultant to the Mathematics Institute and Ecosystems Analysis and Epidemiology Unit in the Biology Department of Warwick University from 1996-2000, and an Honorary Professor in the Mathematics Department. He obtained a BSc in zoology at Hull University in 1954 and a PhD in 1957. In 1959 he was appointed Lecturer in the Department of Zoology and Comparative Physiology at Birmingham University. After a year at Harvard Medical School he returned to Birmingham, leaving in 1987 to become Senior Embryological Advisor and Manager at the Humana IVF Clinic in London.

He wrote numerous papers on developmental and reproductive biology, seven academic books, and several mathematical papers with Professor Ian Stewart of the Mathematics Department on nonlinear dynamics and the evolution of species. Jack and Ian wrote three popular science books together, plus two science fiction novels.

Jack was active in science fiction circles, where he became friendly with Terry Pratchett, then an unknown journalist. The friendship continued when Terry became Britain’s bestselling author, as the creator of Discworld, a flat world on the back of four huge elephants which rests on a giant turtle that swims through space. Jack played a key role in the award of an honorary degree to Terry by Warwick University in 1999. Before the ceremony, Terry made Jack and Ian honorary wizards of Unseen University on Discworld, an event reported in Nature. 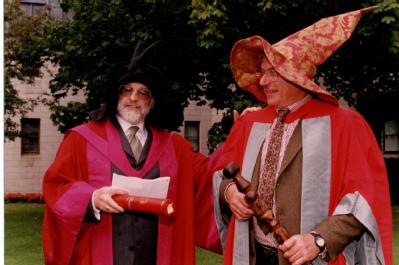 Together, the three of them wrote four popular science books, the Science of Discworld series. Each book combines a short fantasy story by Terry with related science chapters by Jack and Ian. Each was a nonfiction bestseller. The fourth was completed while Terry — by then Sir Terry — was grappling with posterior cortical atrophy, which claimed his life in 2015.

In an article for the Australian Discworld Convention Nullus Anxietas 2017 Stewart wrote: “Jack and I had a lot in common, such as a love of science fiction and an interest in the big philosophical questions of Life, the Universe, and... well, you know.” They worked together for nearly thirty years. “His effect on my life was incalculable,” Stewart says. “His huge circle of friends and colleagues will never forget him.”

There will be a celebration of Jack’s life at 4pm on 22 May at the Great Barr Golf Club 75 Chapel Lane Walsall B43 74A. A finger buffet and welcome drinks will be provided for family, friends, colleagues, students, society peers, and loved ones.