On Tuesday 12th January 2016, Sir Vince Cable visited Warwick to give a talk on whether we are heading for a fresh economic crisis.

The talk, hosted by Warwick Policy Lab and the Warwick Economics Summit, took place in a packed lecture room with students and staff from across the University in attendance.

Sir Vince Cable, a British politician who was the Secretary of State for Business, Innovation, and Skills from 2010 to 2015, discussed the 2008 financial crisis, referring to himself as the “Politician in opposition in the beginning of the financial crisis”.

Following the lecture, audience members were able to ask their questions in a Q&A session, and Sir Vince Cable also partook in a signing for his book ‘After the Storm’; a retrospect evaluating the dramatic economic event of the 2008 financial crisis 7 years later and estimating the point the economy has reached since then.

You can read more about Sir Vince Cable's lecture via the Warwick Economics Summit website. 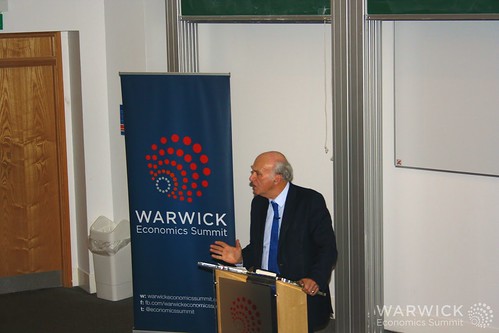 Staff and students can rewatch the lecture by logging in to Echo360.