Dr Claudia Rei, Associate Professor in the Department of Economics, comments on reports that the conoravirus may cause a bigger fall in UK GDP than the South Sea Bubble.

"On recent comparisons between the current economic downturn and that resulting from the South Sea Bubble in the early eighteenth century, it is first important to clarify that the causes of these downturns are not the same and thus the recovery from the present crisis will likely be different. 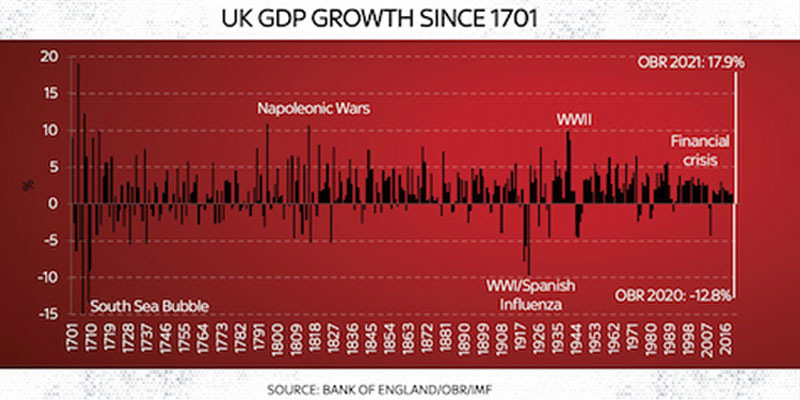 "The picture (left) circulated on social media on April 14 is misleading in time line. The South Sea Company was founded in 1711 and the bubble burst in 1720. The 1720 downturn is not as pronounced as the 1709, which is probably associated with coldest winter in 500 years resulting in the failure of the British wheat crop (Broadberry and van Leewen 2010:20).

"Bubbles result from speculation, for example, people investing their savings in options without solid backing but counting on receiving a sure return. In the 2008-9 financial crisis, housing prices rose substantially and mortgage packages were commercialised by banks in the form of investment products whose risk was low so long as housing prices remained high. The moment the housing bubble collapsed banks failed, people lost their savings, investment (the mirror image of savings) collapsed, and many lost their jobs. That led to a contraction of economic activity ultimately reflected in a decline of GDP and rise of unemployment.

"The South Sea bubble was a similar episode where government debt was converted into South Sea Company's stock, which was good for the government (less debt to repay in the future so lower servicing cost), good for the company (cash inflow), and good for former debt holders (value of their securities rose). The success of the initial conversion in 1719 led the company to propose to convert a much larger amount of debt in the next year (Temin and Voth 2004). Prior success led to more subscribers wanting company shares, thus more issues were made; the share price rose substantially, and thus more issues were demanded. The larger the number of investors holding shares, the more the bubble grew, and the bigger the downturn when the bubble burst.

"The current crisis seems very different in origins though the outcome will invariably result in a collapse of GDP and rise of unemployment (as in any crisis). The health emergency requires the demise of social gatherings so businesses are ordered to close, and people are told to stay at home. This crisis does not result so much a loss of savings (people who have savings will consume them if their regular income stream stops, people who do not will start feeling the bite of the crisis sooner) but a halt in the creation of value.

"In a normal scenario, shops and firms operate and people go to work on a daily basis because they produce something that is valuable. Workers are paid wages, owners of buildings are paid rents, firms sell what they produce at a margin above what it costs to produce it. Right now, a large fraction of economic activity is stopped, so value is not being produced. People have been furloughed, some firms have simply gone out of business and their collaborators are now unemployed.

"The cause of this crisis is not speculation but a deliberate press of the off switch of the economy – a situation almost unparalleled in history."