Warwick welcomes the President of Bolivia

The Department of Economics was honoured yesterday to welcome a former student of the Department, His Excellency Luis Alberto Arce Catacora, President of the Plurinational State of Bolivia, back to the university’s Coventry campus to talk with staff and students, and to learn more about research being undertaken.

His Excellency, who graduated from Warwick in 1997 with a Masters Degree in Economics, spoke on economics to a gathering of students before answering questions, on topics including his life in public service, how his studies at Warwick have informed his career, and industrialisation.

His Excellency was elected the 67th President of Bolivia in October 2020 and had previously served his country as Minister of Economy and Public Finance.

During his visit to the University His Excellency undertook a tour of the campus led by the University of Warwick’s Vice-Chancellor, Professor Stuart Croft, which included the recently opened National Automotive Innovation Centre and the Interdisciplinary Biomedical Research Building, alongside other recent developments. 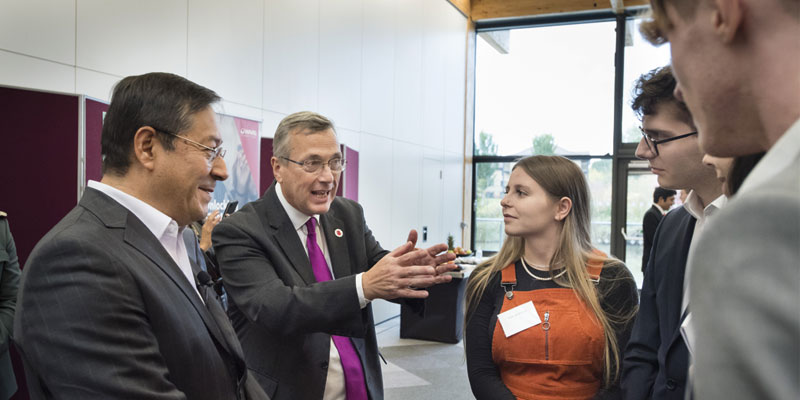 His Excellency also met with University of Warwick researchers involved with the UK’s response to the Covid19 pandemic and the development of green technology.

Speaking during his visit with students about why he chose to study at Warwick and his memories of studies, His Excellency President Luis Arce commented:

“I wanted to go to one of the UK’s top ten universities, and I think I made the best choice.”

“I read the best books here, studied hard, and learnt a lot, especially the scientific foundations of economics.”

On his impression of how Warwick has developed since his time at Warwick, His Excellency said:

“I am really impressed. When I was here, campus was small compared with now. We have a huge campus now, many faculties, new buildings, new subjects and research subjects.”

"It was a great honour to welcome His Excellency Luis Alberto Arce Catacora, President of the Plurinational State of Bolivia to the University, who had previously held positions of Minister of Economy and Public Finance from 2006 to 2017. His Excellency Luis Arce had been a student on the MSc in Economics in 1997 and was delighted to be welcomed by our former colleagues Professor Dennis Leech and Professor Marcus Miller both of whom taught on the MSc at that time. He also met with around 30 of our students (both undergraduate and postgraduate) who were thrilled to hear his talk on the underlying principles governing the structuring and development of the Bolivian economy under his leadership."

“We’re honoured to have welcomed His Excellency Luis Alberto Arce Catacora back to his second home here at Warwick. It is always special to see graduates make their mark in the world, and even more special when they return to Warwick and our region to share their experience and insights with our community.

“His Excellency’s visit was a unique opportunity for our students to hear from a global leader and it was a pleasure to provide His Excellency the opportunity to see how the university has continued to grow and develop since his time as a Warwick student.”