The Growth of Bilateralism

One of the most notable international economic events over the past 20 years has been the proliferation of bilateral free trade agreements (FTAs). Bilateral agreements account for 80 percent of all agreements notified to the WTO, 94 percent of those signed or under negotiation, and currently 100 percent of those at the proposal stage. Some have argued that the growth of bilateralism is attributable to governments having pursued a policy of "competitive liberalisation" - implementing bilateral FTAs to offset potential trade diversion caused by FTAs of "third-country-pairs" - but the growth of bilateralism can also be attributed potentially to "tariff complementarity" - the incentive for FTA members to reduce their external tariffs on non-members. Guided by new comparative statics from the numerical general equilibrium monopolistic competition model of FTA economic determinants in Baier and Bergstrand (2004), we augment their parsimonious logit (and probit) model of the economic determinants of bilateral FTAs to incorporate theory-motivated indexes to examine the influence of existing memberships on subsequent FTA formations. The model can predict correctly 90 percent of the bilateral FTAs within five years of their formation, while still predicting "No-FTA" correctly in 90 percent of the observations when no FTA exists, using a sample of over 350,000 observations for pairings of 146 countries from 1960-2005. Even imposing the higher correct prediction rate of "No- FTA" of 97 percent in Baier and Bergstrand (2004), the parsimonious model still predicts correctly 75 percent of these rare FTA events; only 3 percent of the observations reflect a country-pair having an FTA in any year. The results suggest that - while evidence supports that "competitive liberalisation" is a force for bilateralism - the effect on the likelihood a pair of countries forming an FTA of the pair's own FTAs with other countries (i.e., tariff complementarity) is likely just as important as the effect of third-country-pairs' FTAs (i.e., competitive liberalisation) for the growth of bilateralism. 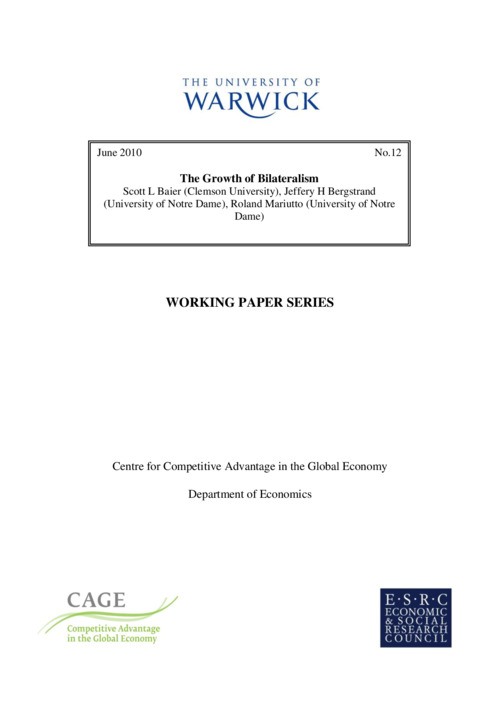