The Rules of the Game: What Rules? Which Game?

Douglass North is famous for, among other things, making institutions the centre-piece of studies of political economy. Institutions are, for him, the humanly constructed rules of the game, a game form in the language of game theory. An alternative conceptualization, associated with Schotter (1981) and Calvert (1995), and responsive to concerns articulated by Riker (1980), conceives of North’s game form as part of a more all-encompassing equilibrium of rational human behaviour. Whereas North takes the rules of the game as exogenous and seeks to identify the equilibria that arise when agents, abiding by the rules, bring particular preferences to a situation, what Shepsle (1979) called a structure-induced equilibrium, Schotter and Calvert allow for the possibility of noncompliance with extant rules and, indeed, for moves that alter the game form altogether. In the present paper, these two approaches are developed more fully. Examples drawn from the US Congress are used to exhibit the ways in which rules arise, change endogenously, and are sometimes even violated. Rational, self-governing agents are not, as in North’s formulation, absolutely bound by exogenous constraints, and are often able to reformulate the ways they do their business. 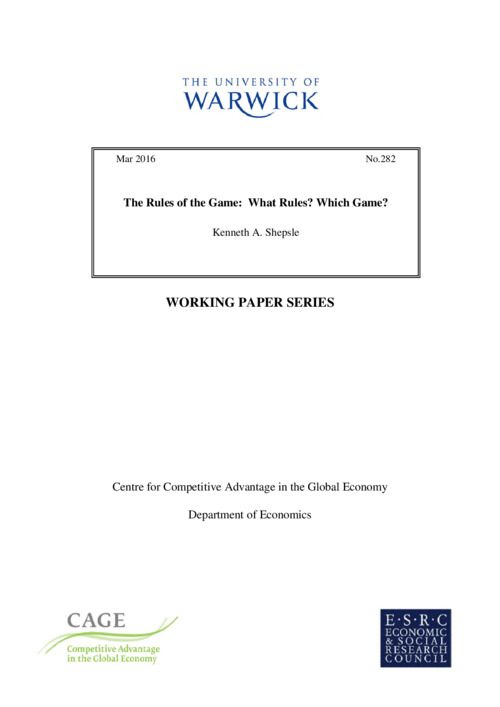