We ran an experiment where 1,503 subjects (advisees) completed tasks, and then had the choice to submit either their own score or that of other, high-scoring subjects (advisers). Good advice was ignored: about 25% of the time, advisees chose to submit their own score instead of higher-scoring advisers, reducing their payoff. When the adviser was superior in skill (rather than luck), good advice was ignored more often. When the adviser was relatively highly paid, subjects were less likely to make use of them. We offer an explanation of the data focused on two behavioural forces: envy and the sunk cost fallacy. The role of envy was complex: more envious advisees, as measured using a dispositional envy scale, opted to follow advisers more often in the skill-based task revealing a positive, motivational effect of envy. However, higher adviser remuneration reduced this effect, demonstrating a negative side of envy. Susceptibility to the sunk cost fallacy had a negative impact on the uptake of good advice. This is consistent with the idea that subjects feel resistant to changing their answers when they put in effort to formulate them. We also present findings from a survey of 3,096 UK voters who took part in the national referendum on EU membership, which are consistent with some of our experimental 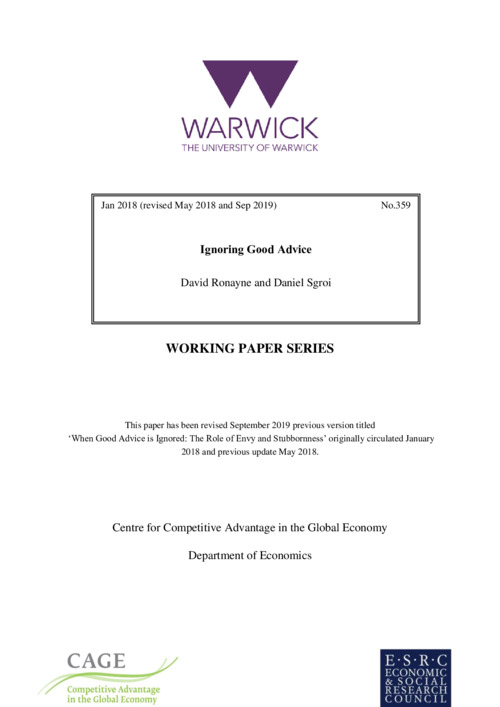