Challenging the origins of prevention in criminal law

‘The Preventive Turn in Criminal Law’, a new book by Dr Henrique Carvalho, offers the latest addition to the Oxford Monographs on Criminal Law and Justice published by OUP (Oxford University Press).

This new book seeks to understand where the impulse for prevention in criminal law comes from, and why this preventive dimension seems to be expanding in recent times.

The series aims to cover all aspects of criminal law and procedure including criminal evidence and encompassing both practical and theoretical works.

The general idea of a ‘preventive turn’ in criminal law is a modern spate of new criminal offences that criminalise conduct that happens much earlier than the actual harm which they are trying to prevent.

Dr Carvalho, Assistant Professor at University of Warwick’s School of Law, explains: “The most illustrious examples, but by no means the only ones, can be seen in terrorism offences. For instance, it is a criminal offence to possess any article of information that may be of use to a terrorist act.

“Offences such as this are deemed to be problematic because they act mainly on suspicion, putting prevention ahead of other important values like the presumption of innocence, and so they are more likely to be abused.”

Dr Carvalho’s book offers up a critical analysis of the role of punishment and prevention in contemporary liberal societies and reveals how recent transformations in criminal law and justice are embedded in the way liberal society and liberal law have been imagined, developed, and conditioned.

“My focus in this book is on questioning an assumption held by many criminal law theorists that we can criticise these ‘new’ preventive criminal offences, without criticising or putting into question the criminal law as a whole.

“I demonstrate that these two things are actually connected: the problems of preventive criminal law have their roots in criminal law itself.

“Therefore if we wish to criticise the former, we need to engage critically with the latter,” Dr Carvalho concludes.

Applying a range of academic disciplines, this volume introduces and explores key issues of debate in contemporary criminal law and criminal justice scholarship, as well as in social and political theory.

Interested readers will be drawn from those with interests in criminal law, criminal justice, criminology and punishment scholars, spanning academics and postgraduate students alike and beyond.

“The first and last chapters of the book would be particularly beneficial to undergraduate students with an interest in criminal law, whilst the ‘middle’ chapters will hopefully prove to be attractive to students of political philosophy, and criminal law and punishment theory,” concludes Dr Carvalho. 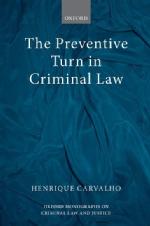 Introduction: The Problem of Prevention
1: Setting the Problem: Liberal Criminal Law and the Preventive Turn
2: Criminal Subjectivity and Socio-Political Imagination
3: Liberty, Insecurity, and the Conceptual Foundations of Reassurance
4: Mutual Benefit, Property, and the Conceptual Foundations of Trust
5: Civil Society, Dangerousness, and the Ambivalence of Liberal Civil Order
6: Retrieving Subjectivity: Criminal Law, Terrorism, and the Limits of Political Community
7: The Preventive Turn: An Ambivalent Law in an Insecure World
Epilogue: Criminal Law, Prevention, and the Promise of Politics

A preview of the book is accessible via books.google.co.uk and is available for purchase now from Oxford University Press.