A Passing Fury : Searching for Justice at the end of World War II

Williams has put together an original polemic against our assumptions about these trials, including those at Nuremberg.David Herman, New Statesman

This is a fine book that does a great job of debunking one of the most enduring myths in history.History of War

Any trial is an act of theatre.
After the horror of the Second World War, the Nuremberg Tribunal became a symbol of the 'free world's' choice of justice in the face of tyranny, agression and atrocity. But it was only a fragment of retribution as, with ther Allies, the British embarked on the largest programme of war crimes investigations and trials in history.

This book exposes the deeper truth of this controlled scheme of vengance. Moving from the scripted trial of Goering, Hess, and von Ribbentrop, to the makeshift courtrooms where 'minor' war criminals (the psychotic SS officers, the brutal guards, the executioners) were prosecuted, A Passing Fury tells the story of the extrodinary enterprise, the investigators, the lawyers and the perpetrators and asks the question: was justice done?

This is a landmark book. Fluently, meticulously, A. T. Williams allows us to understand both the murderous nature of colonial war and the insidious moral corruption behind its institutional facades.John Pilger

A meticulous, devastating account of war's modern cruelty and the pursuit of justice.Philippe Sands, Author of Lawless World

Of immense value to anyone interested in the conduct, and misconduct, of war in our time... It shows why the Iraq story is far from overRobert Fox, Evening Standard

On 15th September 2003 Baha Mousa was killed by British Army troops in Iraq. Despite clear evidence of torture and sustained brutality the army’s initial investigation and its later court martial could not uncover who was responsible for the death, a conclusion mocked by the findings of the subsequent public inquiry.

In a candid and unbiased account of one of the most disturbing controversies in recent British military history, Andrew Williams investigates the death of Baha Mousa and lays bare the failures of the British Army’s initial investigation and subsequent court martial, which the Inquiry was prevented from examining.

The report contains recommendations for improving the extent and quality of Human Rights Education (HRE) within Initial Teacher Education (ITE) in Scotland.

Report of an Expert Round Table Centre for Human Rights in Practice, School of Law, University of Warwick Monday 10th February 2014.

Mary-Ann Stephenson and James Harrison
Layers of Inequality: A Human Rights and Equality Impact Assessment of the Public Spending Cuts on Black Asian and Minority Ethnic Women in Coventry 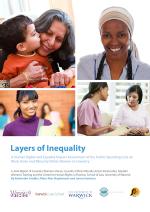 Kalwinder Sandhu, Mary-Ann Stephenson and James Harrison
Using Human Rights and Equality to Analyse and Challenge the Public Spending Cuts – Reflections on Past Practice and Organising for the Future 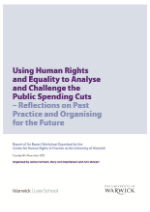 Report of An Expert Workshop Organised by the Centre for Human Rights in Practice at the University of Warwick.

Mary-Ann Stephenson, James Harrison and Ann Stewart
Getting off Lightly or Feeling the Pinch? A Human Rights and Equality Impact Assessment of the Public Spending Cuts on Older Women in Coventry 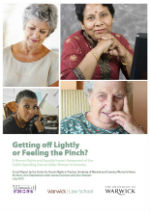 A Joint Report by the Centre for Human Rights in Practice, University of Warwick and Coventry Women’s Voices.

Mary-Ann Stephenson and James Harrison
Unravelling Equality? A Human Rights and Equality Impact Assessment of the Public Spending Cuts on Women in Coventry 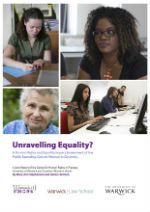 A Joint Report of the Centre for Human Rights in Practice, University of Warwick and Coventry Women’s Voices.

Mary-Ann Stephenson and James Harrison
The State of the Sector: The impact of cuts to civil legal aid on practitioners and their clients

A report by the Centre for Human Rights in Practice, University of Warwick in association with ilegal.org.uk.

Natalie Byrom
Comparing the rights of private sector tenants in England with those in other jurisdictions: Examples of Good Practice

A report of the Centre for Human Rights in Practice researched and prepared by law student Samantha Woods supported by Professor David Ormandy and Dr. James Harrison.