Tell us a bit about your role…

I am professor of French Studies in the School of Modern Languages and Cultures.

Tell us about your award-winning project/work…

My research looks at the relationship between culture and politics during the French Revolution and the Napoleonic period and I've been working with English Heritage since 2013 to enhance the visitor experience at Portchester Castle where French prisoners of war built a fully-working theatre and performed Paris hits for the locals in 1810. This summer there's a sound installation there by internationally renowned artist Elaine Mitchener which draws on my research to explore the ways in which the lives of black Revolutionaries from the Caribbean held at Portchester in the 1790s intertwined with the Napoleonic prisoners a decade later.

How does it feel to have won the Public Engagement Award?

I'm delighted to have won the Public Engagement Award as it's a recognition of all the work I've been doing over the last few years to improve the visitor experience at Portchester Castle.

Why do you think people should get involved with nominating for the University Awards?

Everyone likes to feel that the effort they put in is acknowledged and recognised and nominating someone for a University Award is an easy way to show that you've noticed someone's contribution to the university.

5What was a personal highlight for you from the Summer Party on 24th June? (Other than winning, of course!)

It was lovely to sit in the sunshine and have chance to catch up with people from across the university.

What would you like to say to the person - or people - who nominated you? 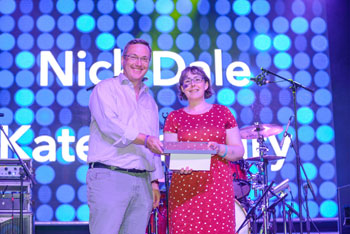