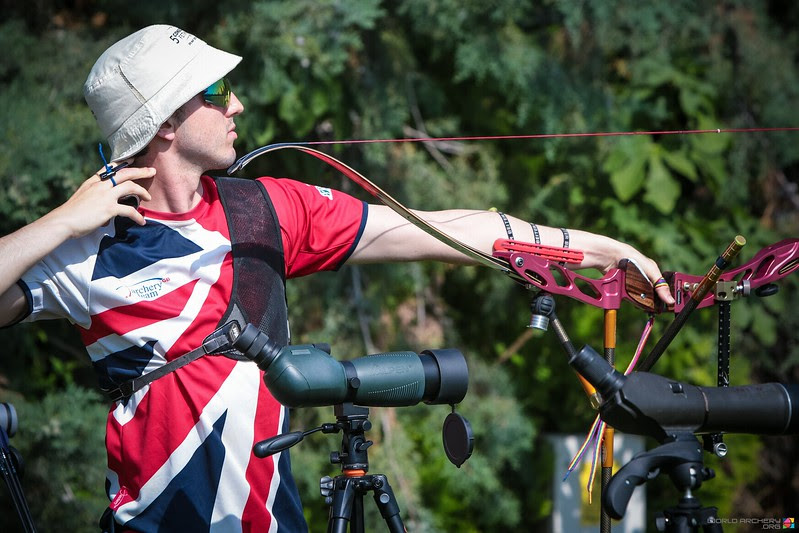 "In qualification I set an international PB of 646, and though there's still room for improvement in the score it was a much more decisive performance, and I didn't see the amber (30 second) warning once throughout the whole round which must be a first!

This left me ranked 48th out of 88 in the mens recurve category and so my first round match against 65th seed Ghenadi IEPURI from Romania should have been relatively straightfoward. Of course nothing is at this stage, and we both shot well above our ranking standard and took the match to a single arrow shoot off. Again timing and aggression were my friends and I hit first with a good 10 and won the match.

In round two I had the London 2012 silver medallist, Furukawa Takahuru. We had qualified on the same target and he had beaten me by about 20 points there, but in matchplay I had the edge, shooting confidently and quickly and winning with 141/150 for the 15 arrows.

Round three was against 16th seed Alexander Kozhin from Russia. This was a much more edgy match, with a tricky bit of crosswind starting to pick up that made it hard to find the correct aiming point. After tying up at 4 set points each though, it was Kozhin who made the mistake, shooting a 7 with his last arrow to allow me to win the set 27 to 25.

Now in the top sixteen I had to face off against number one seed Brady Ellison. Brady has beaten me twice before, both times at the indoor world cup in Nimes (in the first round in 2016 and in the bronze final in 2017). And for the third time he was too good for me here, scoring an impressive 114/120 in four sets to finish my run.

Overall it was a great result, and after never making it past the first round at three outdoor international tournaments it was great to smash much further into the brackets and make the top 16. I've now moved up from 485th to 110th in the world rankings and can't wait for the next world cup event next week in Salt Lake City, USA!"