History of Art student Charity Culley has been awarded a prize by Warwick's Centre for the Study of the Renaissance for her Finalist Dissertation. The Dr Greg Wells Undergraduate Essay Prizes, now in their third year, are awarded for the best undergraduate intermediate-year and final-year essays and dissertation.

On Wednesday July 22 we are delighted to be welcoming artist Oraib Toukan to speak about her work, in particular When Things Occur: a 'desktop film' based on Skype conversations with Gaza inhabitants over the summer of 2014. This powerful and topical film probes the face of mourning and grief – its digital embodiment, transmission, and representation. It asks how the gaze gets channeled within the digital realm, how empathy travels, who is 'local' in the representation of war, and what it means to view suffering 'at a distance'.

The film will be made available ahead of the event via a protected Vimeo link for all those who register.

Call for Papers: Architecture in the Arts

Call for papers on Architecture in the Arts: The Intersection of Artistic and Architectural Practice on a Global Scale. Open to postgraduate students, early career researchers and established scholars alike, papers focusing on the period between c. 1300 and c. 1600 will be presented at a study day and will be considered for publication in a special issue of Architectural History.

Proposals of Max. 300 words for twenty-minute contributions and a brief CV should be sent to Livia Lupi (livia.lupi@warwick.ac.uk) by 13 March 2020

The Department of History of Art at the University of Warwick is inviting applications for the AHRC-funded Midlands4Cities PhD from students whose research interests connect with our fields of expertise. Deadline is noon on 14 January 2020.

PhD research student Delia Moldovan has published an article entitled ‘Astrology and Agriculture in the Calendar of the Offiziolo of Charles VIII (Fondazione Giorgio Cini, inv. 2502/4)’, in the periodical Rivista di storia della miniatura (22 2018). The article is an interdisciplinary approach to the miniatures of the calendar opening the Officium parvum Beatae Mariae Virginis per annum, held in the Fondazione Giorgio Cini, Venice. The study sheds new light on the zodiac signs and the occupations of the months depicted in the calendar, particularly investigating two key features characterising the Milanese court of the late fifteenth century: the interest in astrology and the importance given to agriculture. 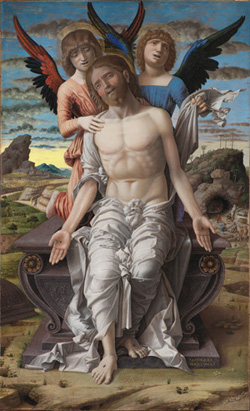 An article written by History of Art research student Fabio Franz has been published in the Ca' Foscari University of Venice journal MDCCC 1800.

Disvelando pale, effigi e panneggi. Le ricognizioni danesi di Crowe e Cavalcaselle presents new research on a number of works housed in Danish collections, including celebrated portraits assigned to Titian and Parmigianino and altarpieces by Ortolano and Filippino Lippi. A comparison of the drapery and landscape painting in works by Mantegna, Leonardo, Giovanni Bellini and Jan van Eyck may to be of particular interest to those visiting Mantegna and Bellini, the exhibition currently on show at the National Gallery, London.

An essay by PhD research student Fabio Franz has been published.

An essay written by Fabio Franz has been published in the proceedings of the prestigious conference on Andrea Schiavone which took place in 2016 at the Giorgio Cini Foundation and at the Marciana National Library (Venice).

In Schiavone nelle carte pietroburghesi di Cavalcaselle Franz argues that scholarship has never paid enough attention to Cavalcaselle's critical approach to Schiavone's work, and that archival sources indicate that even if he never published any article or book chapter on Schiavone, Cavalcaselle could have developed a broad and nuanced connoisseurship of Schiavone's oeuvre. During his stay in Saint Petersburg (1865), for example, Cavalcaselle drew some noteworthy sketches and took some important notes about the technique, the conservation, the attribution and the provenance of some specific paintings placed in Russia that were then assigned - by him or other contemporary experts - to Schiavone. These materials, now kept in the Marciana National Library (Venice), enhance the comprehension of the ways in which Cavalcaselle, as well as his editorial partner, the British connoisseur Joseph Archer Crowe (1825-1896), studied and evaluated Schiavone's drawing, painting and etching skills.

The paper aims to shed more light on the availability to 19th-century scholars of the Barbarigo Saint Sebastian by Titian (State Hermitage Museum, Saint Petersburg). Moreover, this essay’s purpose is to provide some unknown elements on the collecting and critical fortuna of some cassoni dipinti and other specific paintings on panel or canvas that were once assigned to Meldola in Russia and in Western Europe.

This work will help scholars to improve the understading on how Cavalcaselle's and Crowe's method challenged some other major 19th-century European experts of Old Masters, such as Gustav Friedrich Waagen (1794-1868) or Giovanni Morelli (1816-1891), in relation to Schiavone’s style and technique. 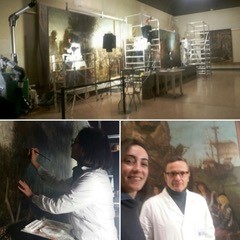 A few days ago, third-year PhD student Benedetta Pacini visited the Gallerie dell'Accademia in Venice where Vittore Carpaccio’s Legend of Saint Ursula cycle, a group of nine large-scale canvases, is being restored. In connection with her research, she interviewed chief restorer Egidio Arlango (seen with Benedetta in the photograph), who is working alongside CBC (Conservazione Beni Culturali) on the project. The work, scheduled for completion by 2019, is being carried out with the support of Save Venice Inc.

Benedetta’s doctoral thesis is entitled Navigating the Canals. Making and Moving Venetian Renaissance Paintings, and is a joint research project between the University of Warwick and the National Gallery in London. Her research focuses on the making and transportation of large-scale paintings in sixteenth-century Venice, with particular attention to those in the National Gallery.

PhD student reports on her participation at Newberry Conference 2018.

History of Art PhD research student Delia Moldovan has presented a paper at this year's Newbery Graduate Student Conference entitled The Calendar of a Printed Book of Hours and Its Impact on Sixteenth-Century Italian Illumination. In the paper, the iconographic impact of incunabula on the production of illuminated Italian calendars is considered using the 'Officium beate Marie virginis: ad usum Romane ecclesie' as a case study. The Officum was printed in Lyon in four editions between 1499 and 1501 by Spanish and Piedmont printers, and edited by Bonino de Boninis. It is demonstrated that the woodcuts were used as iconographic models for two luxury manuscripts created in Ferrarese and Florentine, respectively.

Her REPORT can be viewed online.

An article by PhD research student Fabio Franz has been published.

An article written by Fabio Franz has been published in the latest issue of Brill's journal Experiment.

An Inspirational Milieu: St. Petersburg Cosmopolitan Collections of Old Masters focuses on the provenance, conservation history, and critical fortuna of some selected Western European paintings that were placed in Saint Petersburg between 1850 and 1917. It includes: a comparison between the visits to Russia made by the German expert Gustav Friedrich Waagen and the Italian connoisseur Giovanni Battista Cavalcaselle; an investigation of Cavalcaselle’s alleged meeting with the Russian expert Fedor Antonovich Bruni regarding the paintings Saint Sebastian Barbarigo by Titian, Apollo and Marsyas Litta by Bronzino, and Virgin and Child with the Infant Saint John, now attributed to Pontormo; and an exploration of the extent to which Russian galleries and private collections were accessible to Western scholars.

The talk focused in on the symbolism and significance of the lute featured within Holbein's enigmatic double portrait. Aside from the broken string which emphasised the growing political discord due to the protestant reformation, Holbein's brilliantly detailed depiction of the instrument provides a thrilling insight into the status of the lute at the court of Henry VIII. The talk was researched in association with London luthiers Sandi Harris and Stephen Barber, who loaned a closely corresponding instrument for the presentation.

Several pieces of contemporary sixteenth century music were performed in front of the painting, including a printed Lutheran hymn which appears within the painting itself. 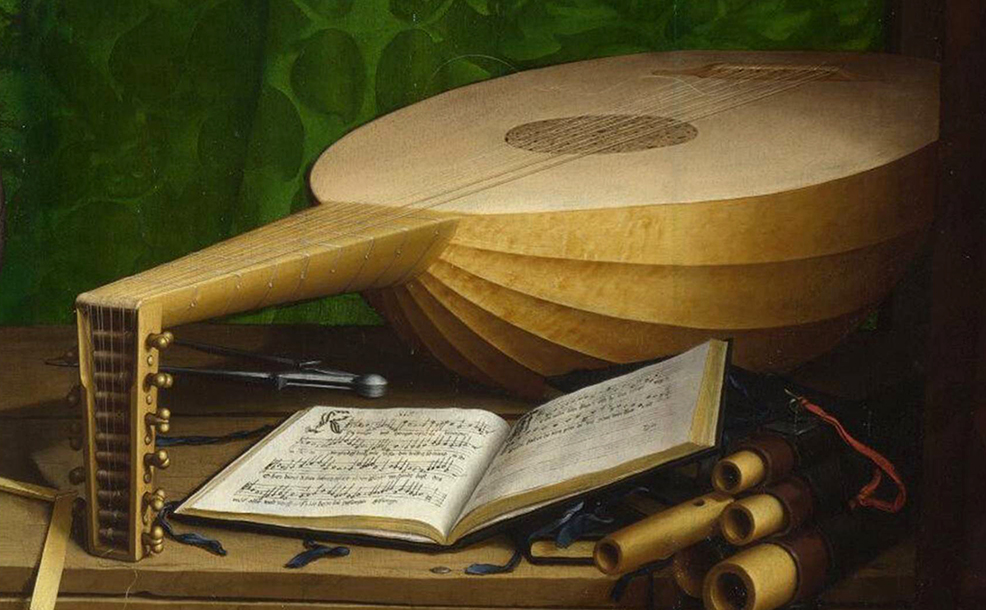 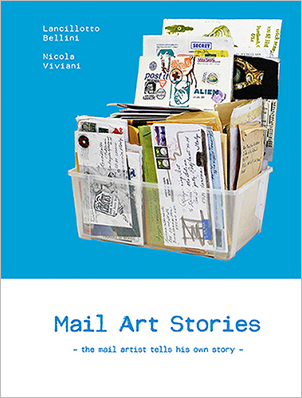 Nicola Viviani has published the book Mail Art Stories: the mail artist tells his own story, in collaboration with the mail artist Lancilotto Bellini. The book records a project conceived by Bellini in the mid-1990s, which collected work from mail artists around the world. This is the first time the project and the works it generated have been published.

Nicola will be joining the department as a PhD student in 2017-18, and will be writing his thesis on collector, patron, publisher and collaborator Francesco Conz, one of the most influential figures in the late-twentieth century neo-avant-garde art world. 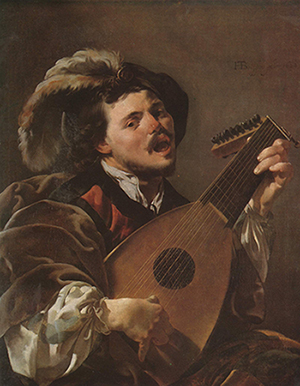 On the 26th of April 2017, Art History PhD student and lutenist Adam Busiakiewicz presented a public talk on Ter Brugghen's Lute Player at the National Gallery in London.

The lute was used by painters to express various ideas in their works, apart from the obvious allusions to harmony and discord. The musical associations with Orpheus, the melter-of-hearts, would not have been lost on the contemporary audience of this painting. Various symbolic links to notions of youth, flippancy and the transience of life and worldly pleasures are also all associated with the mythology of the instrument and its music. Paintings such as Ter Brugghen’s Lutenist allow us to open up a world of understanding how music was appreciated and consumed in the past.

The talk was accompanied by several live performances of lute music relevant to the period and themes of the painting.

Is this the world's most macabre art gallery?

History of Art Department research student Carlo Avilio is quoted in an online article about the series of frescoes in the catacombs of San Gaudioso in Naples. The article concerns in particular the costumed skeletons which were painted around the skulls of interred nobles embedded in the walls. 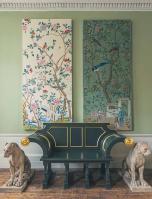 This exhibition celebrated the eightieth anniversary of the Georgian Group. Founded in 1937, the Group is a national charity dedicated to preserving Georgian buildings, gardens and landscapes between 1700-1840 in England and Wales. The exhibition featured over forty artists, craftsmen and architects who work in the Georgian classical tradition. Works on display included examples of pietra dure, scagliola, coade stone, stucco work, wood and stone carving, painted wallpapers and architects drawings. 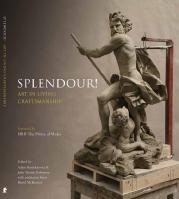 The catalogue was edited by History of Art PhD student Adam Busiakiewicz, who wrote all of the catalogue entries and contributed an essay to the publication.

Adam is especially interested in the history and former collection of the Earls of Warwick and their ancestral home Warwick Castle. His research focuses on the life of Anne Greville, 4th Countess of Warwick, who presided over the restoration of the castle in the late nineteenth century. 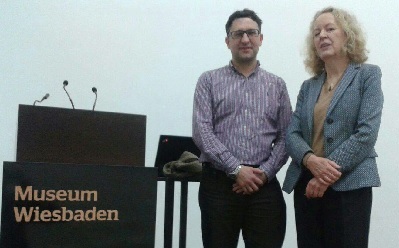 The photograph shows Carlo with Elisabeth Oy-Marra, professor in history of art at Mainz University, co-organizer of the exhibition and conference.

PhD student Charlotte Stokes has written a label for work displayed in The Oculus.

Staff and students were recently offered an opportunity to introduce their teaching and research to a wider audience by contributing labels for works of art in the new Oculus building. Charlotte has selected the screen print Constable Willow 2 by Andrew Carter, drawing a comparison between the approach of Leon Underwood, the subject of her research, and that of Carter, mentioning in particular, Underwood’s work on trees while serving with Royal Engineers Camouflage Division during World War One.

Dr Claire FitzGerald will give a talk today on the early twentieth-century stained-glass artist Margaret Rope. It will take place at Shrewsbury RC Cathedral at 2pm in front of some of Margaret's greatest works. The lecture is one of the activities complementing the Margaret Rope ‘Untold Story’ exhibtion at the Shrewsbury Art Gallery.

Art History PhD graduate has an article in the latest edition of Exchanges.

Recent PhD graduate and WATE award winner Ann Haughton has an article in the latest edition of Exchanges: the Warwick Research Journal. The article, 'Myths of Male Same-Sex Love in the Art of the Italian Renaissance', can be read online in the Exchanges journal.