The physical layout of the equipment in the experimental hutch is shown below.

The physical layout of the equipment in the experimental hutch

The hutch is air-conditioned (temperature stability ± 0.1°) and serviced with cold water, compressed air and nitrogen gas together with a pump exhaust system. To facilitate manipulation of heavy equipment, the hutch is equipped with a 500 kg manual overhead crane and a 125 kg electric one. There is a hinged chicane between the hutch and the main control cabin (CC3) for temporary installation of special electrical connections if required. A motorised web camera is permanently installed on a cable tray close to the roof of the hutch.

A double-mirror harmonic rejection system is installed in the experimental hutch to overcome harmonic contamination from the monochromator. This contamination is also amplified by preferential absorption of the Si (111) reflection in the beryllium windows compared to the (333) and (444) reflections. The Pyrex® mirrors are currently being replaced by silicon mirrors. An picture of the old mirror system is shown below.

The synchrotron incident linear polarised radiation can be converted into circular polarisation Pc by using a quarter-phase-plate. Circular polarisation can also be obtained from x-rays emitted above or below the electron orbit. The former technique is the only way to look at highly anisotropic magnetic materials for which the direction of the sample magnetisation cannot be reversed. The phase retarder assembly is situated about 3 m upstream of the diffractometer. The phase-plate crystals are mounted on a Huber goniometer and are driven to their quarter-wave-plate conditions, for maximum Pc, with a theta and a chi circle. The former rotation stage, which moves the crystal off the Bragg condition, has an accuracy of 0.0001° (0.36 arcseconds). It is orthogonally mounted on the chi circle. The chi rotation sets the optical axis of the phase-plate at 45° to the incident and plane polarisation, with an accuracy of ±10 arcseconds. A counter-balance is also mounted onto the arm of the chi circle. These two rotations are positioned upon two translation stages giving horizontal and vertical adjustment within 10 µm. All the motors are controlled from the SPEC software, which is also used elsewhere on the beamline. The theta circle has an encoder installed. A full description of the operation of phase-plates on XMaS can be found hereLink opens in a new window.

Currently there are three diamond and one silicon phase-plates at XMaS, which are described below:

Specific spectroscopy experiments such as X-ray Magnetic Circular Dichroism (XMCD) require to reverse the degree of circular polarisation (or helicity) at a few tens of Hertz in order to improve the signal-to-noise ratio. In that respect, a piezo driven oscillation stage, the so-called flipper, was designed by the National Physical Laboratory, NPL (UK). The device uses two pairs of multilayer piezoelectric stacks mounted on opposite sides of, and coupled to, an aluminium plate which is free to rotate via two weak links. They are driven in opposite directions to provide displacement of up to 350 arcseconds. This specification, considerably larger than for usual devices, allows each diamond or silicon to be used in a wider energy range. A second advantage is that this flipper is very compact compared to existing oscillation stages and allows easy mounting on the phase-plate Huber 410 circle. The phase-plates are attached to an aluminium frame, mounted onto the aluminium plate with weak links. Two manual linear translations allow positioning of the phase-plate crystals at the centre of rotation of the phase-plate assembly.

In normal operation, the flipper is driven by a 11.5 Hz trapezoidal wave form generated by a TGA1240 arbitrary wave form generator. The signal is amplified by a PI LVPZT amplifier unit and then sent across both piezo pairs.

A flexible modular beam delivery system is installed in the experimental hutch allowing the continuation of an air-free path from the beamline final slit vessel to the diffractometer. It is comprised of two tubular assemblies vertically displaced, the lower tube encloses the unfocused monochromatic or white beams and the upper one the focused monochromatic beam. The main stand can accommodate modular vessels, some above and some below, mounted on X95-compatible carriages. Modules are provided that contain beam intensity monitor, motorised anti-scatter slits, pneumatically operated attenuator foils, absorption/calibration foils and a quad-diode beam position monitor (XBPM). The system is terminated using adjustable length telescopic tubes that allow continuation of the vacuum path close to the sample position. The vacuum tube is closed with a beryllium, kapton or mylar widowed flange.

These slits were developed in order to define the incident or outgoing beam at a position very close to the sample. The adopted design satisfies three basic requirements, namely to define a footprint on a sample, to reduce background scatter and to enable isolation of small regions of interest on the sample. The assembly may equally well be mounted on the incident or diffracted beam path. In order to avoid possible collisions with the diffractometer, all of the actuation mechanics are spatially separated from the sample position, with the four independent slit jaws positioned by a system of levers as shown below. The maximum overall opening aperture of the slit assembly is 2.4 x 2.4 mm and each jaw can be independently positioned to micron precision. The slit assembly may be mounted on X95 compatible optical rail and is therefore interchangeable with other beamline modular components. Motion is provided to the levers through in-house designed miniature linear vacuum feed-through with limit switches fitted on all translations.

These slits are now Huber productsLink opens in a new window and technical details can be found here.

The 11-axis HuberLink opens in a new window diffractometer was installed in 1997. The vertical z-translation exists to permit alignment of the sample to the three possible beam positions: white unfocussed (z = 0 mm); monochromatic unfocussed (z = -14 mm); monochromatic focussed (z = 105 mm). Since the mirror deflects the monochromatic beam upward by 5 mrad, the possibility to tilt (±1°) is provided in order to maintain perpendicularity between the focused beam and all horizontal circle axes. A horizontal x-translation is present to centre the diffractometer in the beam. With the use of the SPEC software, orientation matrices may be defined in psic 6-circle (eta, delta, chi, phi, mu, nu) scattering geometry. Equivalence with 4-circle horizontal and vertical geometries are provided. For surface diffraction or to control the incidence angle and/or the exit angle between the x-ray beam and the sample surface, it is possible to use all six circles to define orientation matrices. 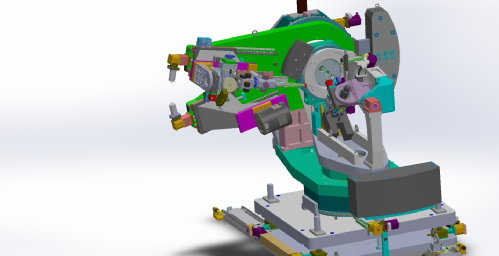 The physical layout of the diffractometer is shown above. Two multi-position plates at the front and rear of the base can be used to mount user equipment. All metallic parts around the sample circles are of non-magnetic material. The Huber 512 Eulerian cradle carries a 1003 sample goniometer head on the phi circle. There is a 10 mm diameter hole in the head and the distance from the base of the hole to the centre of rotation is 43.5 mm. The new detector arm is equipped with two support offset by 25°. This two different detection schemes to be permanently mounted.

Full technical details of the polarisation analyser can be found here.

Both manual and motorised mounting systems for the APD cryostat fit into the Huber 410 phi circle. The manual Huber 5106 mountLink opens in a new window utilises dovetail linear slides for the x- and y-translations, driven by manually adjusted screw threads. The z-translation consists of a sleeve and cylinder linear guide adjusted by a large threaded ring. The motorised Huber 5012.12MLink opens in a new windowLink opens in a new window mount has been designed to facilitate and thereby save time during sample alignment. It fixes to the diffractometer in exactly the same manner as the manual version and has the same translation limits. The three linear translations (x, y and z) are mounted onto high precision linear bearings. The independent x and y movements are obtained by mounting a cam onto the shaft of a stepper motor with a 100:1 harmonic drive gearbox to minimise backlash. This cam is mounted within two linear bearings, thus allowing movement perpendicular to the axis of the motor (x and y) with a minimum of backlash. The z-translation is guided by high precision linear bearings and driven by a stepper motor with a 100:1 harmonic drive gearbox via a large toothed ring cam. The cryostat and z-stage are mounted upon cam followers and as the large toothed cam turns, this provides the z-translation. This stage is held in place on the cam by eight strong springs.

The following detectors are available for use on the beamline:

Avalanche PhotoDiode (APD) detectors are available and offer a very high dynamic range and linearity. They consist of PerkinElmer® silicon avalanche photodiode chips with an integrated preamplifier. Two types of APD are available on the beamline: one with a chip of 10 mm x 10 mm active area shielded by a kapton window and another one with a 5 mm x 5 mm active area protected by a 80 µm thick Be window which is mounted onto a KF-16 vacuum flange. Each APD is controlled by an ACE unit through SPEC. This module includes a user interface in local and remote control mode. SPEC communicates to the module through a RS232 serial line port.

The MAR camera is controlled from SPEC, by specific macros, through a Linux device server running on xmas6 holding the camera controller card. The full MAR165 technical sheet is available here.

The MAXIPIX is a fast readout, photon-counting pixel detector system developed by the ESRF and based on the Medipix2 readout chip developed by CERN and the Medipix2 collaboration. It has dimensions of 145 x 140 x 222 mm and weighs about 4.7 kg. The system achieves up to 1.4 kHz frame rate with 0.29 ms readout dead time and has a pixel size of 55 µm x 55 µm. The available detector features 512 x 512 pixels (2 x 2 chips).

The Maxipix technical sheet is available hereLink opens in a new window.

Two other sessions are used to control the optics and other elements of the beamline: MIRROR and SPECSERV. Generally, these sessions are not needed by the users.

The beamline is controlled through two Linux rackable PCs (ld281 and ld283 running Debian). The PC ld281 in CC1 controls all optical elements, including slit-sets s1 to s4. The PC ld283 in EH1 controls the diffractometer and all other experimental equipment. Device servers are accessed via SPEC or through other ESRF clients, via the Ethernet.

The motor controllers are IcePAPs units, the latest ESRF standard, also directly controlling the encoders. The counting card for detectors is the P201 PC board. Some NIM electronics are also used for the detectors and counters.

Both the vacuum control and personal safety (PSS) systems are hard wired, stand-alone units controlled by PLC's in the CC1 racks. The vacuum control system automatically closes valves in the event of pressure rises, from a leak for example, in a given vacuum section, in order to isolate that section. The PSS enables or disables the opening of the front-end shutter, depending on the status of optics hutch PSS interlocks while the station-shutter is similarly controlled by the status of experimental hutch interlocks. The vacuum control system similarly influences the state of the front-end shutter, i.e. if any valve is closed, the shutter will not open.

The xmas5 workstation also runs several GUI applications that communicate with the vacuum and PSS PLC's. The station-shutter can thus be opened and closed by clicking the appropriate icon with the mouse. Valves can be opened or closed and vacuum gauges read in the same manner.

The choice of anlayser crystal for a given experiment depends on the energy. Listed below are common materials and reflections that may be useful: