We were given another chance to do our mobility run, but something has happened to the motor controllers.

With the operator not even logged into the robot, it decides to randomly drive forwards and backwards (including turns). So we ended up forfeiting the challenge...

All in all we came 10th place and didn't win anything, but we've all had a fun week!

So, 20 seconds into our mobility run this happens:

Judges were sympathetic and have allowed us to fix it and restart. Will post an update after the run.

Unfortunately we did not make the finals, we achieved tenth place and they only let the top six teams forward.

The good news however is that we qualified for the best in class mobility challenge, so we will be busy rebuilding the robot this afternoon for the challenge tomorrow. 1st run: Started well opening the door very quickly even though they had made it more difficult. Located the victim in the back of the car, the judge was quite picky making us go back to it again as he was satisfied we had properly identified the victim. We then raced over the step field avoiding the victim in the front seat as we wasted alot of time on this before. Then the problems began...terrible lag prevented Kris controlling the robot and the remaining minutes were spent pretty stationary. One victim identified.

2nd run: After our terrible wireless connection limiting us in our first run we endeavoured to correct this by finding a wireless channel that was completly unoccupied. Sounds simple changing the router channel but the router firmware telling it what country it was in had to be changed. There is now a new country called WMR. We also decided to switch to Stefan's laptop. All seemed ready to go but five minutes before when we released that Stefan's laptop was missing the correct codec for the 2 way sound. Some quick sprinting and Edgar's laptop solved the problem. Ready to go, or so we thought. The PS3 controller had not been correctly setup so more sprinting followed and the first five minutes of our run was wasted sitting on the start point. However once we got started Kris blasted though the course scoring three victims, our highest score yet. Our old nemesis did come to haunt us however towards to end but didn't affect the run too much.

Scores for today havent been published yet but we are hoping to make the cut for the semis tomorrow.

Michael is currently testing some mapping software that he has be frantically working on since he got here. Lets hope that it works!

Sit-Rep for the start of competition day #2

Today we have another two runs, around 12pm and 4pm. Robot is still functional and in one piece, so everything is under control. We've discussed and revised our strategy tackling the arena to help pick up a few more victims per run.

Later on today the Queen of the Neatherlands is visiting... Does this mean we have to tidy our team area? 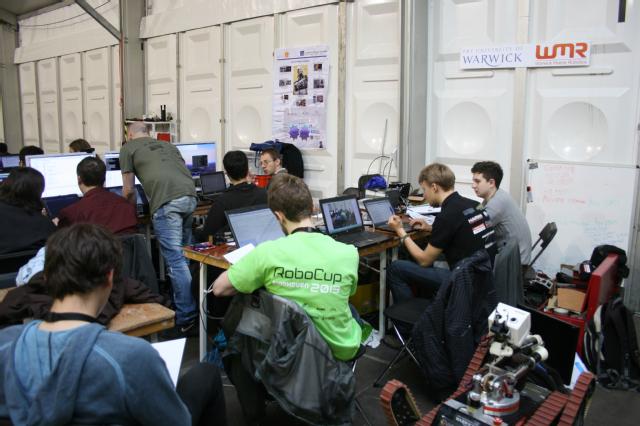 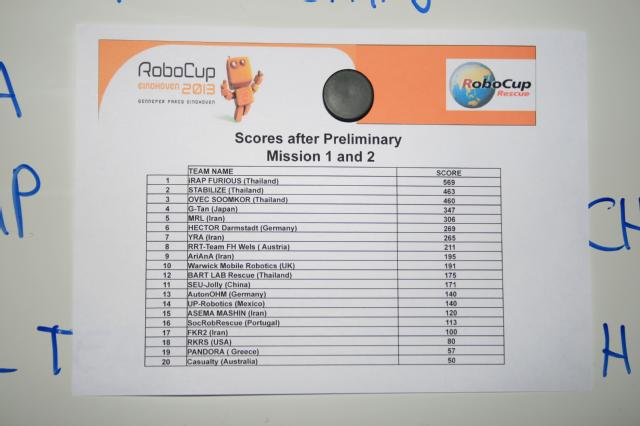 So we've just had our second run of the day and the robot's still in one piece...ish

2nd run started much better; finding two victims in the first 8 minutes, but a communications failure (broken antenna) resulted in significant lag and eventually complete loss of connection with the robot. Slightly dissapointing however finding two victims is still a good score.

Overall first day of competing has gone well, everyone's in good spirits and we seem to be outperforming some of our rivals. If the winds behind us hopefully tomorrow we will be climbing the leaderboard further :)

Here's a video of the first run, the second will be uploaded in an hour or two: [Edit: here it is]

Sit-Rep for the start of competition day #1

Today we've got two runs, one at 9am and the other at 1pm.

Yesterday afternoon was a bit of a rush as we were trying to optimise the arm presets, fix the CO2 sensor and "re-attach" the arm.

We're fairly confident the robot is in a reliable and drivable state. Kris, our driver is busy running around the arena figuring out the best route through the arena...

Slight problem with the arm...

While testing the robot this morning, the drill holes in the carbon tube that holds the arm on cracked. This causes the arm to work loose and fall off at the base joint when driving over rough terrain.

We have some spare carbon tube so we're busy drilling and cutting to make a two new tubular sections. We've arrived and have been setting up and testing the robot.

All is going well, we've got a few demonstration runs to do later along with the opening ceremony.

In the mean time, here's a video!