This article provides a taste of the research I undertook – jointly with the criminologist Keir Irwin-Rogers of Open University, and a few other people – on serious youth violence. This research, which was undertaken over the period from early 2017 till early 2020, was done to support the work of the UK Cross Parliamentary Party Youth Violence Commission, chaired by Vicky Foxcroft MP. I was part of the core team of this Commission, which was an honour and exciting. It was hugely satisfying to secure real-world impact of one’s research as the UK Government subsequently set-up eighteen “Violent Reduction Units” across the country, informed by our research and policy recommendations.

Serious violence has a devastating impact on the lives of countless young people leaving deep and enduring scars on the families, friends and communities affected. The aim of this research – and that of the Commission – is to, firstly, explore and determine the root causes of serious youth violence. Secondly, to assess and evaluate the economic and social costs of such violence. And thirdly, to propose policy measures and mechanisms that can help reduce such violence. While our focus has been on the UK, many of our insights, methods and results are relevant and applicable to other parts of the world.

Our research established that the root causes of serious violence are complex, multi-dimensional and longstanding. Below we highlight some of the key factors. Just to be clear, by “serious youth violence” we are talking about physical and serious violence (such as stabbings by use of a knife instrument, or violence involving the use of guns) and when such violence is committed by people aged between 8 years old to 24 years old.

Adverse Childhood Experiences (ACEs) are one such determining factor. For example, those who committed serious acts of violence had often been subjected to or witnessed domestic violence as children. Exclusion from mainstream education is another key factor. A remarkably high proportion of young people committing serious acts of violence had been excluded from mainstream education – a process that further damaged their self-esteem and identity. Increasing rates of child poverty and growing levels of inequality are yet other drivers of serious youth violence.

We showed, furthermore, that the lack of trust between the police and some communities is a key factor explaining the rising levels of violence. This has been caused, in particular, by a sharp decline in neighbourhood policing, which is a critical mechanism to build and maintain such trust, and other forms of social capital.

The lack of support and investment in certain public services such as youth services and social housing has contributed to rising levels of violence. For instance, an extraordinary number of third sector organisations are being forced to compete for small pots of short-term project funding, leading to the closure of many such organisations that provide vital services to the young. Many young people are growing up in unsafe and squalid housing, and these are young people from the most socioeconomically deprived communities, who are becoming further demoralised and alienated from society, generating feelings of shame, anger and resentment that lie at the core of many instances of violence.

Let me also quickly, and lastly, mention that we uncovered the role of drugs and gangs in contributing to rising levels of serious youth violence.

The economic and social costs of serious youth violence

We undertook an “economic and social cost-benefit analysis” to study the economic and social costs of this violence. Whilst we used data for the UK, as we were interested in these costs for the UK, the methods and methodology we developed and used can be deployed in a similar way to do the same evaluations and calculations for other countries. There are direct costs of such violence, but there are also some important kinds of indirect costs as the said violence imposes negative externalities.

The largest direct costs are the costs of the physical and emotional harms done to people. For example, when an individual is killed because of the violence, this cost boils down to the value of the life of the person killed. We use the now standard “Quality of Life-Years” approach to evaluate these costs.

There are other costs such as costs of lost economic output but let me now briefly mention one indirect cost that we did not manage to measure. And that is the cost from the fear of violence. One serious (adverse and indirect) impact of serious youth violence is the fear it creates amongst others in the neighbourhood and in the community. That fear impacts on other peoples’ behaviour and actions. It is an indirect cost that is worthy of further research as our work in the end did not manage to measure it.

The details of the data, methods and methodology are in our research report, but let me quickly mention that in an attempt to assess the true magnitude of this kind of violence in the UK, we used the British Crime Survey data to estimate it, in conjunction with the police recorded data on incidents. Future work I am sure will refine these estimates.

"The largest direct costs are the costs of the physical and emotional harms done to people."

Public health authorities across the world have been at the heart of the response to Covid-19. Indeed, the public health approach – which in particular involves a coordinated response amongst various agencies and organisations – has been deployed to deal with, and contain, the spread of this pandemic. Interestingly, in its report in 2002, the World Health Organization (WHO) conceptualised serious violence as an infectious disease. And in turn proposed a “public health” approach to dealing with it.

We tested this WHO idea in several ways in our work, including especially looking at a few real-world cases. One case we looked at very carefully was that of Scotland, which adopted this approach about fifteen years ago, when, at the time, it was designated as the “murder capital of Europe” given its huge murder rate. But after ten years it had successfully and significantly reduced its murder rate.

Based on the above, and on our research on the root causes, and on the analysis of the data secured from (a) our own survey on violence and (b) our evidence sessions, we concluded that a “public health” approach would indeed be the best way forward. That is what we recommended as our central, overarching policy measure.

It meant that we proposed that we proceed not just by treating the violence as a criminal justice issue - the standard response - but also from other (preventative) perspectives. The “public health” approach to treating the violence requires a coordinated approach amongst various services and organizations in education, health and social services, and also of course the police and the criminal justice system.

Coordination is critical and is achieved, like it was done in Scotland, via the creation of new and regional Violence Reduction Units (VRUs) across the country. To our delight the UK Government did precisely that in the summer of 2019 and established eighteen such VRUs. This was a nice “reward” for our research – for it to have such real-world impact and that so almost immediately.

For further details, please see the full and final research report containing our research and the policy recommendations, which can be accessed, for example, from my Warwick homepage. And please feel free to email me if you have queries or suggestions. 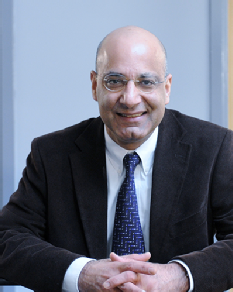 Abhinay has broad research interests, and these include game theory, political economy, negotiations, international development, law and economics, and public policy. He has published papers in many top economics journals and is the author of Bargaining Theory with Applications.