The popular event organised by the Department of Economics and the Department of Politics and International Studies (PAIS), provides a platform for students to engage with politicians, policy makers and academics on major issues and questions that concern the world.

Chairing the event for the first time was Professor Chris Anderson, Professor of Politics and Economics at the University of Warwick.

Economics and Politics students asked questions which put the panellists to the test and opened up an interesting debate. The questions had been selected from over a hundred questiions submitted by students and selected by the Question Time organisers. The questions reflected topics frequently debated in the media in the last few weeks including: How can freedom of speech and misinformation coexist in a free society? Is it still possible for the UK and EU to reach a Brexit deal and how the West's relationship with China will evolve after recent events?

After the event, students were given the opportunity to speak to panellists during the drinks reception that took place within the Warwick Arts Centre atrium. Those who attended said they enjoyed the event and the opportunity to engage in the debate. The annual Question Time event forms part of the induction for newly arrived Economics and PAIS first year students at Warwick,

Missed the event? Watch the show on our Youtube Channel..

For those of you that missed the event or would like to watch the debate again, the full length video is now available on our YouTube Channel here. 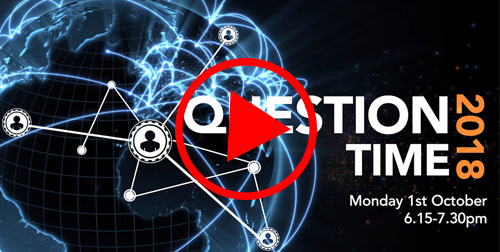