Building on a fruitful course delivered by Professor Norrie at the NLUD (National Law University, Delhi) in 2016; the April workshop, attended by over 50 people, comprised of two days on a diverse and fascinating range of topics offering new and critical dimensions on criminal justice scholarship. 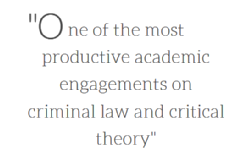 “It was one of the most productive academic engagements on criminal law and critical theory,” remarked Ms Latika Vashist, Assistant Professor at the Indian Law Institute, Delhi.

Sessions included critical realism; violence, gender and sexuality; penality, psychoanalysis and the death penalty; terrorism and torture; the possibilities of legal dialogue; and emancipation and love.

Former doctoral student of Professor Norrie, Dr Craig Reeves of Birkbeck Law School, further supported, expanding on the nature of criminal justice through an exploration of psychoanalytic theory and notions of responsibility.

The workshop mixed UK and Indian contributions throughout, and identified the topics that are important for Indian as well as UK critical scholars.

“The two days were an exercise in unlearning, in as much as they were about learning the new ways of understanding the power and attraction of criminal law,” Ms Vashist concluded.

“It was really inspiring to be in the company of academics who are aspiring to re-imagine criminal law, and not just reform it.”

British and Indian colleagues were able to share experiences of different criminal justice systems, and to engage in a theoretical dialogue about the nature and claims of a critical theoretical approach to the law.

Dr Carvalho, on his experience: "The workshop was a very rich and thought-provoking event, which provided a fundamental opportunity to pursue genuine critical scholarship in matters of criminal justice.

"Personally, it also offered me a unique social and academic experience which helped provide my work with perspective, and enabled me to reflect on its relevance to issues of social justice."

“For me, it was a really stimulating and exciting two days, with fresh perspectives coming from all participants,” added Professor Norrie.

“For example, I was intrigued to learn from one doctoral student at NLUD about her exploration of the meditative technique of Vipassana and its use in Delhi prison. Something I had not known about previously.

“The exchange with Indian colleagues both confirmed the validity of the themes we were exploring and pushed me to think how things can be very different in another setting."

Proving such a success with participants, discussions are now ongoing with a view to develop things further.

In feedback on the event, Professor Bajpai, Registrar at NLUD, said: “On behalf of the National Law University Delhi, I extend my sincere thanks for your kind presence and contribution to the Workshop on Critical Theory & Criminal Justice.

“Your contribution to this workshop has been highly appreciated by the participants [and we are] looking forward to your continued cooperation to similar initiatives in this University.”

Entitled ‘Love and Justice: Can We Flourish Without Addressing the Past?’, the lecture was filmed and will be made available for use by current and future intakes of students at IGNOU.