International Comparisons of a Burgeoning Crisis in Unmet Legal Need

A new edited collection, inspired by research from the Warwick Monash Alliance, considers the impact of and response to cuts in legal aid budgets and access to justice at a transnational level.

On the origins of this collection, Professor Hodgson said: “In our earlier work, which included workshops with academics, lawyers, judges, NGOs and other practitioners, it became clear that key questions around access to justice were being asked simultaneously across Australia and Britain, where we were witnessing some common themes and concerns emerging, but also quite different approaches and responses.”

“As common law jurisdictions, England and Wales and Australia share similar ideals, policies and practices, but differ in their legal and political culture and in their approaches to providing access to justice,” explained Dr Flynn.

“The nature of the communities they serve is also different, however, our work highlights how in both regions it can be the most vulnerable groups who lose out in the way that law is now done in the 21st century.”

In Australia since 1997, there have been consistent decreases in Commonwealth funding for legal aid commissions (LACs), reducing annually from around 55 per cent to one-third (33 per cent) of each LAC’s budget.

Eventually, the 2014 federal budget saw cuts of AU$15 million from LACs and AU$43 million from advocacy services over a four-year period, including from the Indigenous Policy Reform Program which funds Aboriginal and Torres Strait Islander Legal Services across Australia.

The most devastating cuts to legal aid in England and Wales began in 2013, following the introduction of LASPO (the Legal Aid, Sentencing and Punishment of Offenders Act 2012).

The legal aid budget was cut by £350 million, mainly in the areas of family law, immigration, welfare benefits, employment and clinical negligence.

“The experiences in these jurisdictions offer different perspectives on what constitutes justice and how we might seek to overcome the burgeoning crisis in unmet legal need in these regions,” explained Professor Hodgson.

“Who deserves legal aid? Who should determine the scope and policies of legally aided services? To what extent is the right to legal assistance dependent on the right to legal aid? And perhaps most importantly, what are the consequences of leaving many of the most vulnerable in society without representation in the assertion of their rights?”

The book is the first to bring together new theories and empirical knowledge examining the broader social, political, legal, health and welfare impacts of legal aid cuts.

Dr Flynn expanded: “Our book treats access to justice more broadly. Not simply as a legal concept, but also as an ideal that should be pursued both within and outside the law.

“As the chapters in this collection show, there are a number of consequences arising from the cuts that extend well beyond ‘fat-cat lawyers’ and ‘undeserving’ legal aid clients.”

It also examines the role of technology in supporting justice mechanisms and its consequences.

In chapter six, for example, Carolyn McKay discusses the growing use of video technology in prisons and courtrooms in Australia and the impact that this reduction in face-to-face contact has on the nature of the lawyer–client relationship. 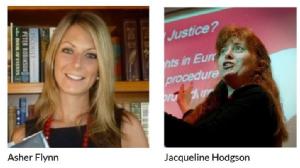 Summing up the outcomes of the alliance, Professor Hodgson said: “This has been a great project that has led to a number of collaborative activities and publications.

“Working with Asher has been a real pleasure and has further cemented the link between law and criminology across our institutions.”

“Working with scholars and practitioners from across Australia and the UK, whose research and practice reveals the limits and possibilities of justice, was a highly rewarding experience,” added Dr Flynn.

The book, available now from Hart Publishing, is essential reading for all those interested in access to justice and legal aid.

1. Access to Justice and Legal Aid Cuts: A Mismatch of Concepts in the Contemporary Australian and British Legal Landscapes : Asher Flynn and Jacqueline Hodgson

3. Rhyme and Reason in the Uncertain Development of Legal Aid in Australia : Jeff Giddings

4. The Rise and Decline of Criminal Legal Aid in England and Wales : Tom Smith and Ed Cape

5. A View from the Bench: A Judicial Perspective on Legal Representation, Court Excellence and Therapeutic Jurisprudence : Pauline Spencer

9. What if There Is Nowhere to Get Advice? : James Organ and Jennifer Sigafoos

10. The End of 'Tea and Sympathy'? The Changing Role of Voluntary Advice Services in Enabling 'Access to Justice' : Samuel Kirwan

12. Cuts to Civil Legal Aid and the Identity Crisis in Lawyering: Lessons from the Experience of England and Wales : Natalie Byrom

15. Indigenous People and Access to Justice in Civil and Family Law : Melanie Schwartz

16. Austerity and Justice in the Age of Migration : Ana Aliverti