Dr Madeleine Fagan is an Associate Professor in the department of Politics and International Studies at at the University of Warwick. Her current research explores the politics and ethics of the Anthropocene. From 2020-2022 she holds a Leverhulme Research Fellowship for the project 'Contending Cultures of the Anthropocene: Prospects for Political Mobilization' (RF-2019-356\7).

Her ESRC-funded PhD thesis explored the implications of prominent critical, interpretive, and non-foundational normative theories for rethinking political action. The monograph based on this research, Ethics and Politics After Poststructuralism: Levinas, Derrida, Nancy, is published with Edinburgh University Press (2013, 2016).

Her current research applies this approach to a focus on the the politics of ethical claims about and representations of the anthropocene, as a lens through which to explore the relationships between temporality, subjectivity, spatial imaginations and political community relied upon in these accounts. Initial outputs from this research appear in Political Geography (2019), European Journal of International Relations (2016) and the British Journal of Politics and International Relations (2017) (see Publications page for details).

I welcome applications for PhD supervision in any of the following areas: 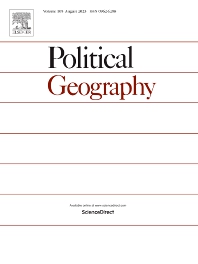 'On the Dangers of an Anthropocene Epoch: Geological Time, Political Time, and Post-Human Politics' Political Geography, 2019.

'Who's afraid of the ecological apocalypse? Climate change and the production of the ethical subject' British Journal of Politics and International Relations, 2017.