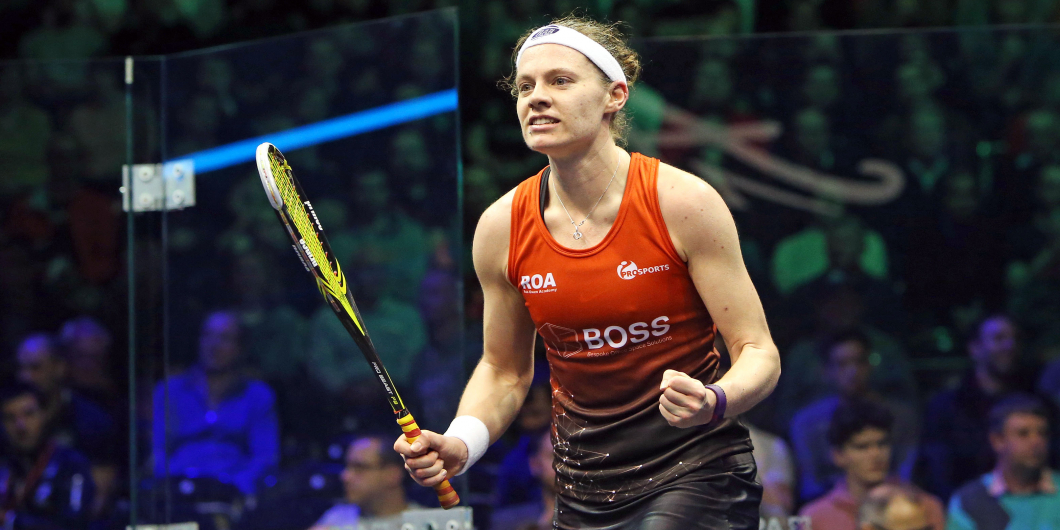 I’m meeting Sarah-Jane Perry, Nr 7 in the Squash world rankings, early morning at her local training grounds in Kenilworth to talk about her joining the new Kenilworth/ University of Warwick Squash League. She rocks up in her training kit and racket to hand ready to go.

Sarah-Jane has played Squash since she was 5 and has played for Kenilworth since the age of 8. In her first year at the University of Warwick she won the European Junior Championships, and over the course of her career he has made some impressive wins. For the past 5 years she has played for the University of Birmingham PSL team, before that, when studying at Warwick, she was playing for Bristol PSL team in the south division.

She didn’t play too many squash tournaments during her degree, as she had an injury in her 2nd year which required her to stay off court for a while. Instead, she took things as they came. At the time she hadn’t decided that she wanted to play professionally, so the focus was on getting a good degree and a good job.

In her third and final year, she was offered a job on a graduate scheme she had applied for, with a good starting salary. It was her coach Steve Townsend, who gave her the ultimate push, saying it would be a shame if she didn’t play professional. This held a lot of weight with her, and a week before her final exams she declined the job offer and decided to go pro. She did complete her degree, with the idea that she could always get a job later on if she needed to.

This came as no surprise to her parents – who were used to driving her to tournaments up and down the country and across Europe. Most students know though that they don’t want to move back in with their parents after they have finished university, but for Sarah-Jane that wasn’t really an option. Without having hit the targets and sponsorships deals, she couldn’t afford to live anywhere else.

Moving from amateur to pro

To start with, she didn’t really know what she was doing, Sarah-Jane said honestly. It was clear though that she needed to plan and work to her budget: what events to attend, estimating potential wins and losses and the potential prize money.

Changing her mind-set from amateur to a professional player was a much bigger step Sarah-Jane said. Moving from, I like playing squash, to taking everything pretty serious. Learning to be and act more professional and having her entire training week planned. Initially the training schedule was something to get used to, but she soon learned how much quicker and more effective the structure was to her playing. Alongside this she developed basic physicality and nutrition knowledge which improved her fitness and professional attitude.

Perry went on to make three successive semi-final appearances in the Carol Weymuller Open, J.P. Morgan Tournament of Champions and the Cleveland Classic. Learning how to manage her own and other’s expectations, Sarah-Jane started working with a sports psychologist to develop coping strategies for the intensely competitive world of Pro Squash.

“Expectations and hope is a double edged sword. If you go onto a match and you don’t think you can win. You’ve already lost. But the ones I found hard are the ones I truly thought I was going to win – and then didn’t.”

When Sarah-Jane was younger she received a lot of criticism in regards to her playing from being “too tall”, not the right body type” to “can’t play squash properly”. Instead of letting them take her away from her dream, she used the comments as fire to drive herself on and prove people wrong. Having self belief and resilience were crucial. “Make yourself as hard to beat as you can, even if you don’t think you’re playing at your best.”

The coach is naturally an important element to the player and for Sarah-Jane, Steve Townsend is her biggest believer, apart from herself.

The PSL is really exciting. Steve has worked really hard to make it a possibility. He’s such a great guy and does so much for squash, and we’re still great friends. I coach on his kids camps. I’m looking forward to playing in that team – he knows me inside out. He’ll be great to have in my corner when I’m playing those matches…. There will be some very tough matches and I’m on a 2-year win streak so I don’t want to loose that.

Challenges of travel – how does the professional life work?

“A lot of the time, you just have to make friends on the tour. Usually you share a room with one particular person, that might not be your best friend, but just someone you can tolerate spending the time with. I’m quite messy for example, only on my half of the room though, so as long as someone is happy with that we’re off to a good start.

On my last tournament in June, my coach came out. It was great to have him right next to me, rather than on the phone in between matches as we usually do. Occasionally it’s nice to have friends come along as well. It’s always nice to have someone there for you really - but if you don’t make friends on tour, it would be quite a lonely place. It’s the same at University – it’s like first day of Uni all over again – learning to make friends. But it’s a strange dynamic – in most individual sports you don’t socialise too much with other people.

You also learn how many days you need to travel in advance to deal with jetlag before a tournament - that only comes with experience. When you go back to places, you learn what restaurants to eat at, you get to know the place, you learn your way round a bit. It’s not as glamorous though as people might think, food and water quality are not always the best, so they need to be careful. “When you go to a new place, particularly to a country that has a different cuisine, if you find a place where you can eat and you don’t feel lethargic or sick, that’s the place you will eat at all week. But yes, we see some amazing places.”

“When I’m travelling I like to take a book with me or logic games. I’ll take a game that you can play with other people as well. Or I watch Netflix and catch up on series – strangely when I’m at home I don’t get to chill out as much – so I also try to catch up on sleep on good nice hotel beds.”

Having played on the England team, where there’s usually 4 - 5 girls on the team travelling together for a week, so you play as part of a team, which again is another dynamic. Playing against each other allows for plenty of history – even people who have played against each other since they were young – when you get onto the court it’s like your 12 again…so it’s something we’re still working on. You get used to the competition... what happens on court stays on court – everyone is there to try to win, so no-one holds that against each other unless a line is crossed.

Because the courts are quite small, you can put them anywhere. “Last year we played in a court next to Great Pyramid of Giza – it was pretty hot and hot wind was a strange concept for me. This did not dismay her from one of the biggest wins of her career when she defeated Malaysian superstar Nicol David in the quarter-finals of the Al Ahram Open in September 2016 in front of the stunning Great Pyramid of Giza.

We had a court in grand central station in New York and I remember one that was one on a terrace in the presidents’ suite in Shanghai – which you could see from the other side of the river.”

What goes through your head before you begin your game?

“I learned from experience that feeling a bit nervous is good if you channel the energy into the match. I like to stay quite relaxed before I go on. I’ll do my warm up, I might be chatting to the other players or having a joke, whilst others will look for a quiet space to get right into that zone. It’s a balance – I’ve come up with some strategies to try and get into that right mind set.

Most of the time you don’t even notice the audience – it’s more apparent when there’s no one there because there’s no clapping after a good shot. When we had the tournament in grand central, the front wall (from glass) was specially textured and there was people walking past the front wall the whole time – so you need to learn to shut that out or you don’t see the ball.”

Advice for anyone considering the pro squash world?

Squash’s main strength is its massive community – between the players and the fans there’s a lot of connection and there’s not many sports where the fans have that much direct interaction on social media. When she can, Sarah-Jane likes to come down to the club and chat to all the players and juniors. The players are really approachable, especially for people who want to look at giving this a go as a career, she says. The sport needs more people to play because that’s what makes it grow.

Looking to the future

Perry’ plans for this season are to climb the rankings and then compete in the commonwealth games in Australia. Players generally retire around age 30 – 35, with some even going strong after that. Usually people go into coaching – Canada, South America and USA are developing more interest in squash. Sarah-Jane Perry is currently already involved in athlete mentoring schemes and she’s also very passionate about getting more women and girls involved in squash or any sports and mentors a couple more junior players. She also has her degree to fall back on, and those transferrable skills. With Companies actually seeing the benefits of hiring athletes who are used to discipline, have a hard work ethic and are very committed, Sarah-Jane Perry is enthusiastic about what the future will bring.