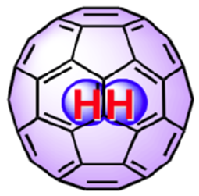 The union of the simplest molecule (H2) and the most symmetric molecule (C60) known to men have enabled the observation of quantum mechanics at a molecular level. The truncated icosahedral symmetry of the C60 cage enable the guest molecule to behave like a three-dimensional quantum harmonic oscillator.

Due to symmetry requirements, para-H2 can only be in states where its rotational angular momentum quantum number, j, is even (0, 2, 4 ...), while ortho-H2 can only have odd j (1, 3, 5 ...). Inter-conversion between the two species is slow in the absence of catalyst as most typical intra-molecular interactions that causes spin flip are small and the energy difference between the rotational energy levels is large because interaction must flip space and spin states simultaneously. [1]

. [1][2] The quantum number m is the projection of the total angular momentum along any quantization axis and it can take integer values from -λ to λ [2]. However, in isotropic systems such as H2@C60, m is not a good quantum number due to the translational-rotational (TR) coupling. λ is the better quantum number as it is used to clarify the TR coupled states.

The energy of the H2 molecules can be written as:

is the reduced Planck constant,

is the vibrational quantum of energy,

is the translational quantum of energy.

is the rotational constant with

representing the vibration-rotation (VR) correction. The last term represents the TR coupling that is responsible for the sub-level splitting, where

is the TR coupling and

is the coefficient. The results from the above equation can be plotted in an energy level diagram (Figure 1). The degeneracy of the energy levels in Equation 1 is expressed in terms of

Figure 1. The inelastic neutron scattering (INS) spectrum of the H2@C60 at 1.5K.